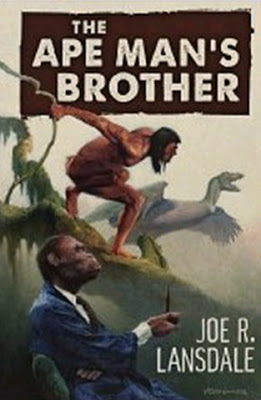 Joe R. Lansdale’s The Ape Man’s Brother is now available on Kindle with a paperback edition to follow.

“What has always been important to me is to tell the stories I wish someone else had written,” Lansdale stated on his Facebook page. “Yesterday I announced THE APE MAN’S BROTHER, a tribute I wrote to Edgar Rice Burroughs and Philip Jose Farmer. It’s a mixture of many things, a lot of my interests.”

About The Ape Man’s Brother:
Orphaned by a plane crash, raised in the wilds of a lost world hidden somewhere beneath a constant mist, The Big Guy and his ape-man brother from another mother are living a life of danger amongst rampaging dinosaurs, giant birds, warring ape tribes, and all manner of deadly beasts. It’s a wonderful existence for someone like The Big Guy and his furry brother, except for the flea problem. Then an expedition of explorers from the outside turn his world inside out. Or rather a very blonde beauty called The Woman does. It leads to his and his ape brother being convinced to fly to New York by zeppelin, where they become the toast of the town. They even make Hollywood movies. It seems perfect. At least until The Big Guy does something that comes quite naturally to him in the wild, but leads to public humiliation in this new found world. To make matters worse, his ape brother has grown to not only love the pampered life, meals he doesn’t have to chase down, good cigars, fine wines and statuesque women, he’s come to like the Wrong Woman.

Changes are afoot. They lead to a return to the world beneath the mist, and a deadly and unexpected encounter with a foe that is in many ways far worse than any dinosaur. Envy, jealousy, greed, fleas, and pyramids under the mist, are all part of this rollicking novella of the sort only Joe R. Lansdale could write. And don’t forget dinosaurs.

You can learn more about The Ape Man’s Brother here.