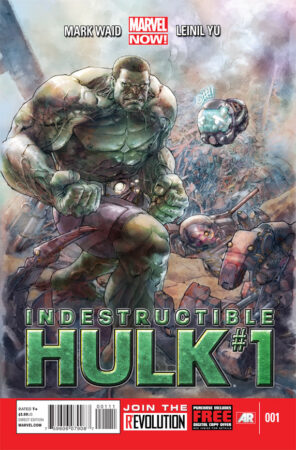 DC and Marvel revamp their characters a lot. A lot. They’ll give suits and names to new people, give them back to the originals again, come up with interpretations so far afield of the original that there’s nothing left but the name. And they all fail or succeed at varying degrees. While it may not actually be the case, Aquaman is generally considered to be the most-rebooted character in DC Comics. There were so many versions of him that he was declared “radioactive”, and left to lay fallow for many years until Geoff Johns had the time to come back to him and start him anew, largely by going back to basics. Not exactly ignoring everything that’s come before, but by creating a good enough current version that people were willing to forgive and forget the past.

After a bit of thought, I came to the conclusion that the most rebooted character in Marvel Comics is The Hulk. Not in the sense of a new origin or person in the suit, so to speak, but in the vibe between the character and his alter-ego. The battle for control between Bruce Banner and The Hulk has been there since day one. But the winner in the game, and the playing field on which the battle has taken place, has changed more often than Katy Perry after her third encore. The Hulk has been made intelligent, made less intelligent, been shot off into space, made MORE intelligent, been separated from Bruce Banner, been re-integrated, and any number of permutations of those scenarios in between. Some have lasted years, like Peter David’s awesome run, and some, like John Byrne’s, barely got out of the gate. Most recently, we’re gained three more Hulks of varying genders, hues and textures, the original Green guy has been separated from Banner (again, see above list), and Banner was some sort of Dr. Moreauesque madman that The Hulk was out to kill. In honesty, it’s gotten so incomprehensible that I had to walk away from it all and just wait for the inevitable turn of the wheel.

And turn it has.

DC took the plunge a year ago and rebooted everything, giving them a chance to wipe the slate clean for any character that wasn’t working at what they thought at their full ability, and subtly leave alone the stuff that was (i.e., Batman and Green Lantern). And largely, it’s been a success. Marvel, all the while swearing it isn’t a knee-jerk reaction to DC’s relative win, has chosen to drink from the same hole. They’re restarting their books, with new titles, numbering and creative teams (save for Dan Slott remaining on Spider-Man, for which we are all rightly thankful). The new books do not reboot the characters in the brute-force way that DC has, but with each new creative team comes the opportunity to take the characters in A Bold New Direction.

Mark Waid, who has recently shown great style and grace on Daredevil, has been handed the reins to The Hulk in his new title, The Indestructible Hulk. Like all the new titles, it features a new hook to hang the character on. Banner and Hulk are one again, And Banner has taken a new tack in the battle – management, as opposed to containment or cure. So he resolves to do as much as he can to make amends for The Hulk’s actions while he’s in charge, and when he’s not, places himself in trust of people who can point The Hulk in the right direction so he can at least smash things that need smashing. Both of these strategies are achieved by both turning himself in to, and applying for a job with, SHIELD. He makes the case for both by presenting an invention that can purify the atmosphere and eliminate airborne diseases, and by taking out The Mad Thinker virtually single-handed – I’ll leave it to you to determine which alter-ego does which.

It’s a neat idea that goes in new directions. Like Hank Pym and Peter Parker, most writers forget that Bruce Banner is a top-level scientist, one of the greatest minds in the world. But, as he says in the book, he’s largely courted not for his brains but his body. In the past, Banner’s role has largely been that of plot-device. When he’s not his own hapless sidekick that gets in trouble at the worst moments, he’s the guy who creates a device at the last moment to control The Hulk, or at least try to. Both Pym and Parker have gotten more of a chance to let their genius shine brighter, and so far it’s stuck. Giving Banner a chance to do the same is a good idea.

I have worries, or more correctly, facets of the same worry. Namely, the book is eternally named after the muscular side of the pairing, and I’ll be curious to see how long readers will read about a scientist before they demand they Get To The Fucking Monkey. Waid has done an astounding job at character work in his career, and it’s that talent that will be needed to make the readers care as much about the brains as they do about the brawn. The first issue goes a long way towards that goal – Hulk appears less than Banner does, and Banner’s scenes in a small town diner do more to drive the plot than the Hulk pager do. Banner talks a good game, but his words could just as easily be interpreted as those of an addict trying to explain how he’s got it all figured out, this time it’ll work, he can cope with his issues.

And that sort of leads into the other facet of my worry. Like Aquaman, Hulk has been re-imagined SO many times, it’s hard for me to imagine a take that will last. It seems almost as if Waid has taken that into consideration here. Anything, ANYTHING that Banner tries to do with The Hulk is one tantrum away from falling apart. This seems like a very good idea, and Waid’s writing makes me want it to last. But too often in comics is the desire, both by the readers and the company, for a character to return to first position. So as much as I like the new improved Hank Pym, I fear that another writer is going to revert him to the bitch-slapping paranoid. So too here – I dread the day that Banner’s best-laid plans go astray once again. This is a good enough take that I WANT it to succeed, though I know that it will be decided by a power over which Banner has no control: the readership.