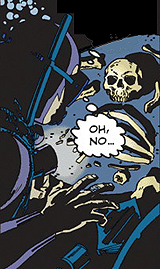 While we’re all busy celebrating the 49th anniversary of Doctor Who and the 50th anniversary of both Spider-Man and the James Bond movies, the daddy of heroic fantasy characters quietly turned 76 way back in February. Or, depending upon how you look at it, he turned 476.

The Phantom was the very first masked, costumed hero in comics, debuting in the pages of the many Hearst papers February 17, 1936. He wore a dark outfit – when the feature added a Sunday page, an unthinking engraver made the costume purple for some unknown reason and the color stuck. He fought piracy and other crimes and handed down his clothes, his weapons, his Skull Cave, his fortune and, most important, his legacy to his son. The current guy – most have been named Kit Walker – is the 21st. This cool concept predated Doctor Who by a generation.

One would think the locals were pretty stupid to believe this dude has been the same guy all these many years. Indeed, given the fact that the base for the Phantom’s stories is in Africa (originally, it was sort of India-ish), one might even think this concept was kind of racist. Creator Lee Falk’s liberal street-cred was impeccable and he built the myth on local folk-lore and the unimpeachable fact that criminals are a superstitious, cowardly lot.

As time progressed we saw African civilization modernize as we continued to see its treasures and its history plundered by contemporary pirates and opportunist Europeans. Nonetheless, about 30 years ago I was having a conversation with the features editor of the Chicago Tribune who expressed astonishment that The Phantom polled highest among its black male readership. I told him he wasn’t reading the strip very closely.

What’s remarkable – astonishing, really – is the fact that The Phantom remains in the newspapers to this very day. This is a feat unmatched by Terry and The Pirates, Little Orphan Annie, Li’l Abner, Buck Rogers, Flash Gordon, and just about every other continuity newspaper comic strip except Dick Tracy and Mandrake The Magician.

I should point out that Mandrake the Magician was created by Lee Falk as well… two years before The Phantom.

The original artist was Ray Moore; subsequent talent on the strip and on the comic books reads like a Who’s Who of comics: Carmine Infantino, Bill Lignante, Sy Barry, Joe Orlando, Luke McDonnell, Dave Gibbons, Dick Giordano, Don Newton, Jim Aparo, Alex Saviuk, Graham Nolan, Alex Ross, Paul Ryan, Eduardo Barreto, and Terry Beatty… to name but a few. Writers include Peter David, Mark Verheiden, Scott Beatty, Tom DeFalco, and Tony Bedard. Tony DePaul has been writing the strip for the past twelve years; he’s also written many of the comic book adventures as well. Nearly every major American comic book publisher had a turn in creating new adventures, and it remains a top-seller in Australia, Sweden, India and many other nations.

Currently, the dailies are being drawn by Paul Ryan and Terry Beatty – perhaps best known for his work on Ms. Tree – is the Sunday artist. Terry had the awesome responsibility of stepping into Eduardo Barreto’s shoes after Ed’s sudden death last year. He’s doing quite an admirable job.

I continue to be amazed by The Phantom’s enduring appeal. If your local paper isn’t carrying the feature (assuming you still have a local paper) you can read it at King Features’ excellent Daily Ink site, where they carry all of the current KFS strips, including Mandrake, as well as reprints of many of their classics, including The Phantom, Mandrake, Flash Gordon, Buz Sawyer, and about a zillion others. It costs $19.99 a year to subscribe to the whole thing, and I doubt you can spend the same amount on a better mix of comics material.

Every time we read a costumed hero comic of any sort, we owe a debt of gratitude to Lee Falk, an amazingly gifted and singularly interesting man.