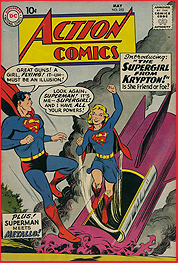 Readers of this column know very well my love of Kara Zor-el, i.e. Supergirl, as she was portrayed during the Silver Age. Debuting in Action Comics #252 (May 1959), Kara’s look was designed by Al Plastino with her continuing adventures drawn by her quintessential artist, Jim Mooney for the next ten years. I was 5-going-on 6 in May of 1959, and Kara, depicted as a healthy young girl just entering adolescence, was athletic and slim, but not overly muscular, and especially not overly endowed in her chest area. It wasn’t just her powers or her ability to be Superman’s secret weapon that captured my imagination – I wanted to be like her when I grew up. Yes, I had dark hair and brown eyes and I was born in Brooklyn and not in Argo City, the last surviving city of the planet Krypton, but she was a role model for me in that I wanted to grow up to be athletic and slim and strong and capable.

In other words, Kara gave me a healthy sense of my body and what it could be.

A few years ago I was riding on the PATH train into New York City when an ad caught my eye, partly because I knew the doctor who was advertising on the placard and partly because of what he was advertising: a labioplasty. This is a plastic surgery procedure for altering shape of the labia majora and labia minora. Yes, as an operating room nurse, I have participated in these procedures, and I do remember one patient whose labia majora was “overly endowed” to the point that it was embarrassing to her when she wore a swimsuit.

I’m not talking about that type of legitimate need. But 99.9% of these women who underwent the procedure did it for purely “cosmetic” reasons. Of course I couldn’t say this out loud, but what I was thinking was “are you fucking kidding me?” (Honestly, girlfriends, have you ever fretted about the anatomy of your labia majora or labia minora?) Apparently these women believed there was something wrong with their natural formation – meaning that it wasn’t “perfect.” I always had a suspicion that these women caught their men looking at the Playmate of the Month or the Penthouse Pet of the Month and felt inadequate. But, although of course I couldn’t ask them, I also wondered if their men had complained. I doubt it. (Guys, do you fret about the shape of your woman’s labia majora or labia minora?) At least I’ve never had a man break up with me – so far as I know – because of that particular part of my anatomy.

But most girls don’t read comics, you’ll say, and if they do, it’s Betty and Veronica or manga comics. Well, first of all, I don’t believe that’s so true anymore. Like football, I think the fastest growing segment of the comics audience are girls and women. I’d like to think that most adult women are grown-up enough to understand that comics are fantasies, and that they are capable of ignoring the bubble breasts, wasp waists, and lengthy legs of female super-heroines (if the writing and story is good, of course) without going into hyperventilation and toxic shock about their own anatomy.

But young girls, even if they don’t read super-heroes, are exposed to it when they visit their local comic book emporium. And exposure is 9/10ths of the law when it comes to thoughts about body image and self-respect and self-actualization.

Martha is right about comics being a small part of the media culture’s obsession with how women should look. But some companies are doing it right – Dove ran a very successful campaign featuring women whose body types ranged from svelte to chunky. And More magazine ran a feature a few years ago on Jamie Leigh Curtis with pictures of Ms. Curtis au natural – no makeup, no Photoshopping, no special lighting, no Spanx or body tape to hide or pull up sagging body parts. And by the way, it was Ms. Curtis’ idea to photo shoot herself as she is in “real life.”

It was part of an issue whose entire focus was accepting yourself.

Accepting yourself. It sounds so easy.

But it’s so hard. After all, we can’t all look like Wonder Woman, unless your name happens to be Lynda Carter.

But it’s worth every minute of sweat and every tear that’s shed.

Damn it, I gained a pound.