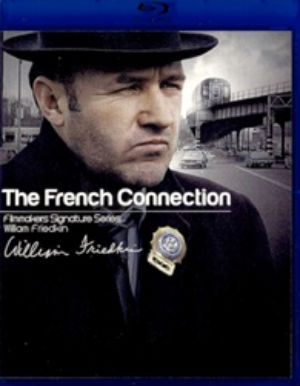 The escapades of New York Police detective Jimmy “Popeye” Doyle was well known even in the early 1960s and attempts to tell his story fell through until he was captured in print in the best-selling Robin Cook book The French Connection. William Friedkin helmed a film adaptation that made Doyle the poster boy for brutal but effective policemen for the next decade and catapulted character actor Gene Hackman into leading man status. The French Connection is very much a product of the 1970s as filmmakers were shaking off the restrictions of the now-dead studio system and a new wave of filmmakers were stretching their muscles, trying things that were new and fresh in terms of structure, production, and performance.

As part of 20th Century Home Entertainment’s Signature collection of classics now on Blu-ray, this film is a reminder of just how good a movie can be when all the right elements fall into place. When first released in Blu-ray back in 2009, Friedkin was intimately involved in the transfer and touted its improvements. Overlaying a saturated color print over a black and white print, Friedkin obtained a washed out color palette that he felt properly represented his vision and while purists howled. This new version is also approved by both Friedkin and Cinematographer Owen Roizman and looks good, certainly better than the original DVD. The transfer captures Manhattan at a time when it teetered on the brink of grime and bankruptcy.

Why did this win the Best Picture Award in 1971? It’s a story of good versus evil, drugs, an immortal car chase and terrific performances by an ensemble that featured Roy Scheider as Doyle’s partner Buddy “Cloudy” Russo, ex-con-turned-coffee shop owner named Sal Boca (Tony Lo Bianco), and French shipping executive Alain Charnier (Fernando Rey), who is trying to brink 120 lbs. of heroin into the city. The core story is the attempt by Doyle and Russo to find out when the shipment will arrive and arresting Charnier, but getting the facts and then executing the arrest propels the movie with the tempo of a finely tuned race car. Doyle is the center, profane, racists, crude and mesmerizing.

Speaking of races, the car chase is a class as Doyle commandeered a civilian’s Pontiac LeMans and chased an elevated train carrying an escaping hitman. Shot in the Bensonhurst section of Brooklyn, it followed the BMT West End Line (now the D and B lines) until the subway collided with another. The front mounted cameras was undercranked so the speed appeared higher than it was but was an adrenaline-pumping sequence that elevated the film to the upper echelon of action pics at the time.

The disc re-presents the 2001 DVD’s extras including two audio commentary tracks – one from Friedkin, the second with Hackman and Scheider. The deleted scenes are accompanied with Friedkin’s interesting commentary and there are two documentaries: the BBC-produced The Poughkeepsie Shuffle and Untold Stories of The French Connection – 30th Anniversary Special. New to Blu-ray are seven new pieces: Anatomy of a Chase; Hackman on Doyle; Friedkin and Grosso Remember the Real French Connection; Scene of the Crime; Color Timing The French Connection; Cop Jazz: The Music of Don Ellis, and Rogue Cop: The Noir Connection, with historians James Ursini and Alain Silver. Like others in the Signature series, it comes with a glossy booklet with tons of information on the film.