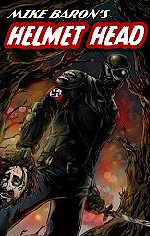 The premise of Helmet Head is simple: Young Jewish motorcycle cop Peter Fagan inadvertently stumbles into the path of someone or something that stalks bikers and leaves them headless. Although there are plenty of outlaw bikers in the story, the killer targets anyone on a motorcycle. Right after he dispatches a member of the local southern Illinois biker gang, he pursues Fagan with frightening singleness of purpose. He pursues Fagan all the way to the biker hangout, a rundown, out of the way bar, where Helmet Head doesn’t kill anyone. Instead, he orders a drink. When the bartender refuses to serve him, he leaves. This sets the tone for a rather long stretch.

The action kicks into high gear again in the last third of the story, and if you can get past the mad scientist angle and the obligatory damsel in distress, it’s a fairly entertaining ride. The climactic conflagration is a smorgasbord of horror movie clichés – which might have worked, despite the rather offhanded way one of the main characters dies, if it weren’t for the rather anti-climactic (and inevitable) scene in which the villain meets his end.

Mike Baron is a good writer, and that shows early on in Helmet Head – and based on my extremely limited sample of self-published works of fiction, Helmet Head is the best-written one so far. The first few chapters are tightly paced, with just enough colorful metaphor to give the narrative depth. But good writing and good storytelling are not the same thing.

Helmet Head apparently started as an idea for a “slasher film,” and that unfortunately also shows. Unlike a non-stop action film, a good novel, even a slasher/horror/thriller novel, requires some characters with depth. Even if you don’t like the characters, you need to have some sense that they are real. For good or ill, you need to care what happens to them; otherwise you won’t keep reading to find out. This can be accomplished in a number of ways, but interspersing the main story with unrelated stories from the characters’ pasts only works if it gives the characters more depth or motivation or something that gives the reader a sense of empathy. In the case of Helmet Head, it just gives the characters … well … pasts. Fagan’s early life and Jewish heritage are apparently supposed to be significant in some way. As it turns out, not so much.

Helmet Head reads like a screenplay padded out to make a novel. The pieces just don’t fit together very well. The pacing is uneven. Aside from the occasional overly long asides into the various characters’ back stories, some scenes just don’t seem to make any sense at all. What does Fagan do after the biker gang takes off in pursuit of the monster that has just chopped off the head of their friend and tossed it through the bar window like a basketball? He goes in the back room of the bar and … takes a shower. Freshly showered, he “… stood in the doorway and scanned the room as he’d been trained to do.” This is because the entire bar is a potential crime scene … one in which he’s just taken a shower. And only after that does it occur to him that maybe he should find a vehicle and get the hell out of there and do something, anything.

To be fair, maybe I expected too much. I’m a big fan of Baron’s work on the comic book Nexus, which seamlessly weaves action, drama, humor, and moral conflict into compelling storylines. The most enjoyable aspect of my brief tenure in the comics industry was working with Mike on that book. Unfortunately, those qualities are sadly lacking in Helmet Head.