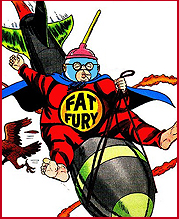 There are the Great Eternal Fanboy Questions. (The Eternal Fanboys sounds like a comic itself or a geek Goth band.) One of them is “Who is stronger, the Hulk or the Thing?” Or the variation “Thor or the Hulk?” You can even ask who is stronger – the Hulk, the Thing, or Thor, but that gets complicated and a little metaphysical.

The Classic Eternal Fanboy question, though, predating the others is “who would you rather be, Superman or Batman?” Supes can fly and has all those powers; he’s become sort of the Swiss Army Knife of superheroes as more and more abilities were added over the years, like super-breath. There are mornings when I’ve had super-breath. Not quite like Superman’s but still pretty potent. It had me grabbing the Kryptonite mouthwash.

Batman, on the other hand, is all dark and moody and mysterious and he has all those wonderful toys! And, underneath that cowl and cape, he’s human. One of the prevailing arguments in the debate is that we could never be Superman because he’s an alien from another planet but if we really worked at it, if we were as dedicated as Bruce Wayne, we could become the Batman.

In your dreams, pal. Never going to happen. All us Eternal Fanboys also have second lives as the Eternal Couch Potatoes. Maybe we could be Herbie the Fat Fury, who got his powers from special lollypops, but not The Batman.

As a comic book writer, I’ve been asked the question more than once (and have pondered the answer a few times) which character would I prefer to write – Superman or Batman? Most of you who know my work would probably guess Batman and, for much of my early career, it was true. My forte are dark, moody, violent characters and Batman certainly fit into that. Superman was this big blue Boy Scout with an annoying girlfriend and a personality almost as thin as the paper on which he was printed.

Over the years, however, that’s changed and these days I find I’m drawn more to the Man of Steel. I suppose it started with Christopher Reeve’s portrayal in the 1978 Superman movie. It was Superman’s humanity that struck me. That also came out in Grant Morrison’s superb All-Star Superman run, simply one of the best incarnations of Superman that I’ve seen.

For me, the heart of Superman, the basis of who he is, is not the powers that he has. It’s that he was raised on a farm in Kansas and those are the values that were instilled in him. At heart, he is Clark Kent. Not Kal-El of Krypton and not Superman. Not even the Clark Kent as perceived at the Daily Planet. At heart, at his core, he’s that Kansas farm boy. There is a humility in him; his upbringing is what defines him as a character and not his powers and that, I think, is how it should be. It’s who he is and not what he can do.

Batman has become a much darker and less human character over the years. It’s his way or the highway. He no longer tries to intimidate just the bad guys but his friends and co-workers as well. Batman is the central personality; Bruce Wayne barely appears and then only to serve Batman’s needs. He’s a compelling character, no question – but not one I feel drawn to as much anymore.

Maybe it’s just that I’m growing older but I value Superman – Clark Kent – for that humility, that humanity, and find that it speaks more to me. For all his being an alien, I think Superman is more human than Batman. So, for me, the answer to the Eternal Fanboy question is – I’d rather be Superman.

Your mileage may vary.