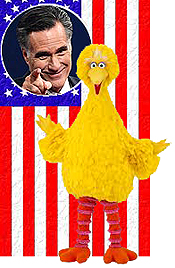 So, the first Presidential Debate of 2012 is over. Romney appears to have won it, President Obama mostly didn’t show up, and moderator Jim Lehrer took an early retirement. So what’s the big take away from the event?

What Romney actually told Lehrer was “I’m going to stop the subsidy to PBS,” adding, “I like PBS. I like Big Bird. I like you, too.” Earlier this year, he told Fortune magazine “Some of these things, like those endowment efforts and PBS I very much appreciate and like what they do in many cases, but I just think they have to stand on their own rather than receiving money borrowed from other countries, as our government does on their behalf.”

Of course, the fact is that the government doesn’t borrow from other countries specifically to pay for NPR and PBS. They borrow mostly to pay for the war in Afghanistan or, as they have in the past, the war in Iraq which they did to a very large degree. As Neil deGrasse Tyson trenchantly tweeted, “Citing PBS support (0.012% of the budget) to help balance the Federal budget is like deleting text files to make room on your 500 gig hard drive.”

But let’s leave that aside for a moment. Let’s leave aside all the policy wonk moments and the substantive issues and who lied and how much. This is a pop culture column so let’s focus on the pop culture moment – Sesame Street. Big Bird. That’s what they’re really talking about on Twitter, Facebook, and the blogosphere. And the message is that Romney wants to kill Big Bird.

That’s not what the man said. Agree with him or not, he doesn’t think that public funds should go to fund public television. I don’t happen to agree with him (any of you who don’t understand that I’m a liberal and support President Obama haven’t been paying attention) but I understand his view.

It seems to me that the comment was an off-the-cuff remark made in an almost jocular manner. After months of preparation (some would say years), Romney appears to have made an off-the cuff-remark and shot himself in the foot with it and then inserted the foot in his mouth. From the response, you’d think that Big Bird had replaced the eagle as our national emblem. And a reasonable question is – why?

One of my favorite moments in Oceans 13 (the second best of the Ocean films) is when a very irate Al Pacino is telling a very cool (as always) George Clooney that he’s going to get some guys after Clooney’s Danny Ocean and they know how to really hurt a guy. I’m paraphrasing all this but Ocean replies, “I know all the same guys you know and they like me better.”

That’s the deal here. Romney personalized his opposition to funding certain endowments. He could have left his point with the concept that he didn’t think the federal government should help subsidize things like PBS and, hence, Sesame Street. Instead, he adds Big Bird’s name to the conversation. A whole generation has grown up with Big Bird. Moms have planted kids in front of Sesame Street for several generations. They trust it. And the message that got carried was that Romney will make it go away.

Romney doesn’t get the impact of Sesame Street or of Big Bird. He certainly didn’t grow up watching it (neither did I; different generation) and maybe his kids didn’t, either. It’s not of real value to him and so he sees no problem if it disappears. Twitter, Facebook, and the blogosphere are suggesting that it matters to a lot of people.

To paraphrase Danny Ocean, we know Big Bird, Governor Romney, and we like him better.