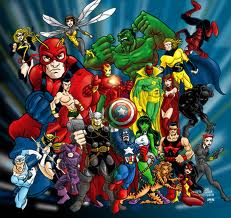 Got The Avengers DVD on the day of its release and watched it all over again. My Mary and I enjoyed ourselves immensely and, from all indications, so did a lot of other people since its big screen release made more money than all but two other films.

Yes, previous Marvel films (Iron Man 1 and 2, Thor, Captain America, and the last Hulk film) all built up to it. It was great how it took the basic stuff we knew about all of them, including the initial Avengers comics, and was true to them but do you know what really made The Avengers such a juggernaut?

Over at DC, the Silver Age began when the legendary Julius Schwartz (hallowed be his name) took a bunch of character titles and concepts from the Golden Age, re-imagined them for what were more contemporary tastes, and re-ignited the superhero comic. He wasn’t concerned with continuity with the Golden Age, which was itself never too concerned with internal continuity; he wanted to sell comics.

When Marvel started (as Marvel) back in the Sixties, it started with all new characters at first so they didn’t have continuity problems. Even when they worked in Golden Age characters like Captain America and Namor, you didn’t need to have ever read any of the old stories. Everything you needed to know about those characters were in the stories.

Say that you’ve seen the movie The Avengers and you’d like to read a comic based on what you saw. So you go into a comic book shop and find: The Avengers, The Uncanny Avengers, The New Avengers, The Secret Avengers, Avengers Assemble, Avengers Academy, Dark Avengers, and, if you hurry, Avengers Vs. X-Men. This doesn’t include The Ultimates, which might be closest to the movie. Which one do you choose? And, if you do choose one, can you understand the story? Is it accessible or so caught up in past or current continuity as to not make sense to a casual reader?

Look, I’m well versed in the ways of continuity. I’ve mined it for my own uses. However, when I started my run on Suicide Squad I essentially dropped everything but the title, even redefining the concept. Yes, I made use of continuity but I never assumed that the reader of the new book would know anything about the old series or care about the old characters.

I work in Star Wars and believe me when I say that the continuity there is as dense and complicated as anything at Marvel or DC. I’ve learned how to negotiate those reef filled waters by either creating new characters or going forward or backwards or even sideways in time. I research the continuity where my stories touch upon it but I don’t get tied down to it.

The ones who care about continuity are the fans and the hardcore fans care about it most. I’ve had all sorts of fans who want to tell a story based upon some obscure plot point that doesn’t fit quite snuggly enough into continuity (or how they perceive it) and explains it all. It’s hard to tell stories based on continuity alone. They’re bloodless. Story comes from characters and their desires and interactions.

This summer we’ve seen a load of very successful superhero movies – The Avengers, The Dark Knight Rises, The Amazing Spider-Man (itself a reboot from the last Spider-Man movie which was out only about five years ago). So there is a market out there. Yes, yes – comics and movies are two different media but the concepts are the same in both. Do we want to attract even a portion of that audience? For the survival of a medium we love, all of us – fans and pros alike – need to say yes.

The way to do that is with well-told stories that are accessible to all readers. Mary and I know a friend who watched The Avengers with her grandson and both enjoyed it. And they enjoyed watching it together. That’s something we should aim for.

In the end, if continuity gets in the way of a really good, accessible story, then I say – continuity be damned.