MCCAULEY AND FERGUSON GET ON THE FIGHT CARD 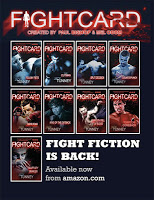 Fight Card is excited to announce the addition of Derrick Ferguson and Terrence P. McCaulley to the Fight Card Team of two-fisted, hard-punching, writers who will have fighters slugging it out on the pages of Fight Card main events in 2013.

New Pulp sensation Derrick Ferguson – the creator of the modern pulp hero Dillon– is a native of Brooklyn, New York. His interests include radio/audio drama, Classic Pulp from the 30’s, 40’s, 50’s, and the current New Pulp movement.

With his podcast partner, Thomas Deja, Derrick currently co-hosts the Better In The Dark podcast where he rants and raves about movies on a bi-weekly basis. Derrick is also a rotating co-host of the PULPED! podcast, where he interview writers of the New Pulp Movement as well as discusses the various themes, topics, ebb and flow of what constitutes New Pulp and why you should be reading it.

His books include, Dillon and the Voice of Odin, Dillon and the Legend of the Golden Bell, Four Bullets For Dillon, Dillon And The Pirates of Xonira, and The Adventures of Fortune McCall, all of which are available through Amazon.com as paperbacks and ebooks.

Terrence P. McCauley is a proud native of the Bronx, NY. He first gained recognition as a writer by winning TruTV’s Search for the Next Great Crime Writer contest in 2008.

His short story Blood Moon of 1931 appeared in Matt Hilton’s Acton: Pulse Pounding Tales Vol. 1 and his short story Lady Madeline’s Dive appeared in the first edition relaunch of Thug Lit in 2012. Both anthologies are available for the Kindle at Amazon.com. His novels include, The Slow Burn from Noir Nation Books (as an e-book), and Prohibition from Airship 27, both of which will be published in late 2012.

McCauley’s novel Fight Card: will be released in January 2013.

Ferguson’s Fight Card: Brooklyn Beatdown will be released in February 2013.