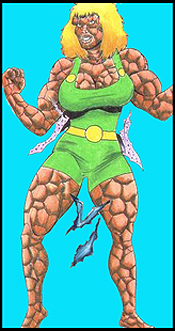 Recently, I had a long wait for a mammogram at the doctor’s office and I used the time to consider why living in the real world is better than living in the world of comics. And I love comics.

10. In the real world, buildings don’t get knocked over in fights. If they do, it’s such a big deal that we invade Iraq.

9. Crowd scenes in comics show people who are better looking, in general, than we are in the real world. Very few are overweight or wear baggy clothes. They are not ethnically diverse. A disproportionate number have Mohawks. In the real world, we stumble along in our own individual funks, and I don’t stand out with my gray hair and cellulite.

8. Parties in comics are even worse. Women wear outfits that would require more Hollywood tape than can be found in all of Bigelow. No woman ever wears a nice pantsuit unless it has a plunging neckline. No woman could eat a sandwich in those outfits. In the real world, it’s not a party without a sandwich.

6. Or one of the candidates is an alien. That hasn’t happened in the real world yet. Not that we know of.

5. In comics, a disproportionate number of people are doctors, corporate executives, fashion models and scientists. None of those are careers for which I would qualify, much less succeed. In the real world, I can be a writer.

4. No one in comics spends any time in the bathroom. I have a decent percentage of my library there.

3. In comics, any misunderstanding with a person you just met turns into a knock-down, drag-out fight before you resolve your differences and team-up. In the real world, we have a conversation. And sandwiches.

And, because I was waiting for a mammogram (which was fine, thanks for asking)…

2. In the real world, radiation can detect, and sometimes cure breast cancer. In comics, it can make one Hulk out. I don’t want my tits to get large, green, and super-strong every time they get angry.

1. Or else radiation can make them invisible, stretchy, on fire, or orange and rock hard. We only need one Pamela Anderson, thanks.