George Lucas and Steven Spielberg were two of a generation of filmmakers that studied their craft in the late 1960s, having been raised on a steady diet of science fiction and comic book action courtesy of the 1930s movies and serials making the rounds of television. Their sense of storytelling and pacing clearly harkens back to the breathless sense of adventure found in the 15-chapter matinee events and the chills that Universal’s monsters offered. They cut their teeth in film and television, respectively, paying their dues and exploring at a time when almost anything was possible in Hollywood. When their friendship blossomed and the notion of collaborating on a film came up, it seemed obvious they would explore those common sources of inspiration.

Thirty years ago, we were treated to the first result and collectively, we were blown away. Everything felt pitch perfect about Raiders of the Lost Ark, from John Williams’ rousing score to Harrison Ford’s casting and appearance. It demonstrated new facets of their craft and proved a commercial blockbuster—the right film at the right time during a magical summer when almost everything else was pretty spectacular.

The success led to more sequels of varying quality but the fedora, the whip, and the theme music have been burned into our collective consciousness, making us want more. After the disappointing fourth installment, the films were packaged as the Complete Adventures and this week, Paramount Home Video brings Indiana Jones: The Complete Adventures out entirely in Blu-ray along with a fifth bonus disc of extra material. It’s a handsome package, complete with terrific Jason Palmer paintings to decorate each sleeve. 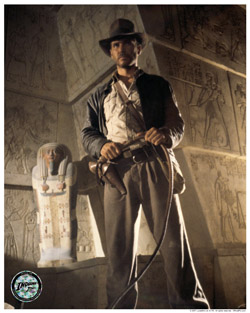 Raiders of the Lost Ark, Indiana Jones and the Temple of Doom, Indiana Jones and the Last Crusade, and Indiana Jones and the Kingdom of the Crystal Skull are all here in their gorgeous high definition glory. The first film, making its Blu-ray debut, was meticulously restored and looks amazing. This alone makes the set worth having because it’s like watching it again for the first time and you revel in the subtleties. Each disc comes with the theatrical trailers, saving the remaining extras from the previous editions plus new material for the fifth disc.

Let’s get right to the new material so you can judge whether or not this is worth buying one more time. Your get a brand new “On Set with Raiders of the Lost Ark” “From Jungle to Desert” (29:35) offers up new footage, beginning with location scouting and including chronological footage of the making of various scenes, intercut with remastered clips from the film. All of this is supplemented with interviews from Spielberg, Ford, and company. You get some bloopers and deleted moments including yes, the almost gun versus scimitar scene. The second part, “From Adventure to Legend” (28:17) goes on to explore storyboarding, set construction and scene preparation for the “Well of Souls” sequence. We then get treated to the details behind the “flying wing” fight sequence, the truck chase, and so on. The Legend part allows them to weave in outtakes and deleted scenes from the next three films. Like the films and creators, these two offer you some new information and additional moments to watch.

Also new is the 1981 “Making of Raiders of the Lost Ark” making its home video debut. The other features from the various DVDs are here although none converted to high definition.

Indiana Jones is far from your everyman considering his wide range of skills and knowledge. He’s a globetrotter during an era when that was romanticized in fiction and film and encountered famous personages with great regularity. And yet, all he wants to do is preserve the past and teach at the University, charmingly oblivious to the dreamy stares his co-eds shoot his way. Indy is charming in a regular guy way, with that sly smile that shows he’s in charge of the situation. He’s also flawed, giving Ford something to work with. His complicated relationship with his father, explored nicely in the third film, frames his character and might explain how he managed to sabotage his romance with Marion Ravenwood (Karen Allen), the one great love he spent decades missing before finally marrying her. By then, he’s discovered his illegitimate son “Mutt” (Shia LaBeouf) and feels the responsibility to make up the lost years and have a vastly different relationship than he had with his father.

The legends and lore that propel each story work well with the different time periods each film is set in, allowing a rich, textured world for Indy and his pals to explore. Spielberg and Lucas have wisely avoided filling each movie with too many special effects, keeping their appearance generally for each climax.

Of course, there’s comic relief, which worked well in the first film with Sallah (John Rhys-Davies) and less so with others such as Short Round (Jonathan Ke Quan). The opponents also varied in quality from his mirror self in Belloq (Paul Freeman) to the unconvincing Elsa Schneider (Alison Doody). It’s a shame the films are so uneven given how great the main character is but Spielberg’s tastes take a back seat to Lucas’ concepts and by now it‘s clear he is great with some high concept notions and less great with the details and pacing, making you wish he’d collaborate more with the likes of Lawrence Kasdan, who helped make that first one so memorable.

The third film wrapped up many threads and actually made for a fitting end, a satisfying conclusion to the film trilogy so the gap between that and the less successful Crystal Skull burnishes the former’s appeal all the more. It’s a shame since the older but not necessarily wiser Indy dealing with government conspiracies and UFOs during the 1950s felt like a perfect launching point.

While uneven, the skill of the cast and crew make even the weaker installments worth repeated viewing. This is a handsome package, stuffed with wonders and well worth adding to your video library.