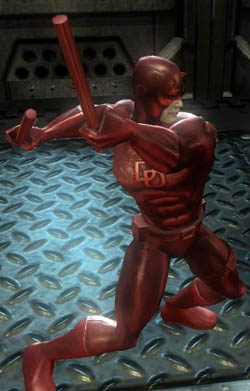 Joe Carnahan, director of The Grey, The A-Team, Smoking Aces, and Narc, had been approached by 20th Century Fox to do a reboot of Daredevil, the blind Marvel Comics character who uses his heightened other senses to battle criminals, previously brought to life in a film starring Ben Affleck, Jennifer Garner, Michael Clarke Duncan, Colin Farrell, and Jon Favreau.

20th Century Fox has to get a new Daredevil project underway by October in order to keep the rights, otherwise they revert back to Marvel Studios. Right now, it looks like Carnahan’s version is dead, but he released two “sizzle piece” videos that cut together footage from the 2003 film with comics images from Frank Miller and David Mazzuchelli’s “Daredevil: Born Again” and scenes and audio from various crime dramas– I spotted Taxi Driver, The Untouchables, Serpico, The Warriors, and Enter The Dragon— to create a feel straight out of 1970s exploitation films. I kept expecting to see Richard Roundtree walking around that version of Hell’s Kitchen.

via ‘Daredevil’ reboot goes ‘up in smoke’ | Inside Movies | EW.com.