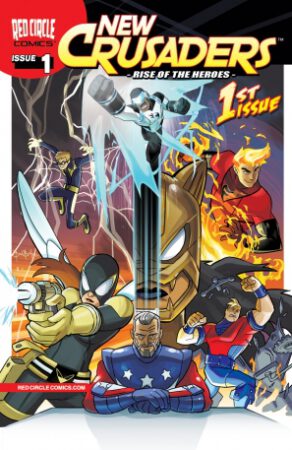 With four months of digital success under their belt, Archie Comics brings their superhero stable back to comic shops with the first print issue of New Crusaders, in comic shops this week.  Each issue collecting the four weekly “acts” of the digital release, the comic is a response to the many requests from readers who wanted to see a traditional edition as well.  Archie has done a good job of it, with several special covers and some extra bonuses not seen in the digital release.

Archie Comics superheroes have had a long and varied publishing history. They premiered in 1939, enjoyed a a re-emergence in the 60s, another in the 80s, a couple revivals that never got out of the gate, and two attempted revivals by DC Comics, the woefully underappreciated Impact imprint from the 90s (helmed by our own Mike Gold), and the more recent Red Circle line which started strong with the J. Michael Straczynski books, but never seemed to find its audience.  This time around, Archie has chosen to do the job themselves, and unlike the DC revivals, have made the new series part of the continuity of all their books, starting back in to 40s.  While the book has decades of history and continuity, the book is carefully written to not require knowledge of those stories.  It can easily be picked up as a first issue, with no fear of getting lost.

The members of the superhero team known as the Mighty Crusaders did something never before heard of in the annals of super-herodom; they succeeded.  They beast evil into submission, sent the villains running, and spent the last couple of decades happily retired.  After an explosive tease, the story starts with the Crusaders enjoying a reunion in the peaceful  town of Red Circle, where Mayor Jack (Steel) Sterling is throwing a party for the heroes and their families.  While the heroes reminisce in the Mayoral mansion, their kids are getting to know each other outside.  Lucky for them, because one of their greatest foes, alien overlord the Brain Emperor takes the opportunity to take out his old foes all at once.  Only Joe Higgins, the original Shield, escapes, and manages to get the kids to safety in his home, or more specifically, his secret headquarters below, where he’s maintained vigilance for the return of their enemies.

Ian Flynn, who’s made quite a name for himself piloting both of Archie’s big video game franchises, Sonic the Hedgehog and Mega Man, handles the writing for the series, and he’s got a solid grasp of what makes an action comic work.  Even more importantly, as the digital book is coming out six pages at a time, he’s been able to pace the story so that each weekly chapter reads like a complete adventure, yet still flows smoothly in this single-issue format. Artist Ben Bates has a wonderful open style – his characters are drawn simply, his layouts uncluttered, very reminiscent of Impact artist Mike Parobeck; an art that is complex without being overly busy.  There’s lots of easter eggs for older readers; the aforementioned city of “Red Circle” is only the first. In addition to the main adventure, this issue features a reprint of a original Shield story from the 80’s run of the series, written by Marty Greim and art by industry vets Dick Ayres and Rich Buckler.

The print edition of New Crusaders publishes monthly.  The digital edition is available via an iPhone app and for the web and other devices via the Iverse website.  For a 99 cent weekly subscription, readers receive a new six-page chapter each week, as well as access to a growing library of the classic MLJ/Radio/Archie runs of the comics.  For the occasional “Fifth week”, a second series, Lost Crusade, will fill in the blanks of the events between the end of the 80s run of adventures and the new ones.  It’s one of the best digital books being done by a major publisher right now, and both it and the new print edition are well worth a look

For those interested in learning more about the members of the Crusaders, I have a series of histories up on my website: