Please read parts one and two before this installment. 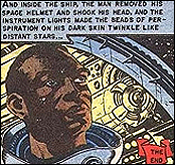 The Comics Code Authority (CCA) tried its best to stop EC from publishing a particularly offensive (to them) comic book. The book they were trying to stop was Weird Fantasy #18 (April 1953); the story was called “Judgment Day.”

What was objected to was not a gory scene of a space monster under orders from a criminal ripping to pieces an earth girl who, clad in scant bra and panties, was an obvious sexual tease for 50s era yikoung boys.

What was objected to was the main character, an astronaut, was revealed on the last page in the last panel to be a black man. Wow, who knew that the Tea Party was alive and well in 1953 under the name Comics Code Authority?

Why am I surprised at this? The GOP thinks that a woman can’t get pregnant and everyone knows that’s science fiction but (sorry Peter) I digress…

The CCA demanded the story removed or the last panel changed to a white boy. ECs editor William Gaines, the publisher of Weird Fantasy, responded to that demand with “Fuck you.”

Like Branch Rickey, the man who brought Jackie Robinson to professional baseball, William Gaines was a civil rights pioneer. Both were white men and although Gaines rarely gets any kudos for his civil rights stance, certainly not the way Rickey is remembered.

That shot fired in 1956 started a war in the comic book industry over black story lines, black characters and black creators and that war continues today. A war not nearly as difficult as it was in 1956 but a war nevertheless.

Milestone was a worldwide phenomenon making history with its ground breaking deal with DC Comics. At the time the deal with DC was the biggest joint venture deal ever done in comics.

The deal was not the reason Milestone was heralded. Milestone was rocketed in front of the public because the founders were four African American men. We were four because Christopher Priest left the company before Milestone published.

In the almost 20 years since Milestone came on the scene the company is still thought of as the penultimate African American comic book company.

It’s good because Milestone accomplished something that was a long time coming. Milestone put black content on the map. Black creators, black characters and black story lines were propelled to the forefront of the American comic industry. Never before in comics long history has African American content captured the imagination of fans, retailers and the press.

Where is the next wave?

Within the African American comics’ community there exists splits’ that mainstream comic book readers for the most part are not aware of. Among most black creators Milestone is respected, but there are some young black creators who see Milestone as sellouts, Uncle Toms or worse. Some in the black comic book community have gone so far as to brand Milestone, House Niggers when discussing our groundbreaking deal with DC Comics.

This is the state of the very real divide within the black comics community.

There is a thriving independent group of young black creators who are doing bold and wonderful work. They publish with small indie houses or they self-publish. The stories they are creating are mostly Afro-centric, mostly positive but there are some which are anti-establishment, a.k.a. anti-white.

Where’s the next wave?

Why is a new black anything (comic, creator, character) at Marvel or DC still seen as a breakthrough 20 years after Milestone and 58 years after Judgment Day?

Case in point, Marvel’s new half black, half Latino Spider-Man. That was a huge story, which captivated numerous news cycles. The recent cancellation of DC Comics’ New 52 Static Shock after only six issues sent shock waves (pun intended) throughout the industry.

Here’s what Denys Cowan and I, co-creators of Static Shock and both black creators think, Static was cancelled because this hit, cool, teenage hero was fighting a giant fish.

Up until now there has been no serious attempt to showcase African Americans and the creative excellence, which has been a mainstay of the industry for as long as comics have been an American art form. Unfortunately at the beginning of the American comic book business, African Americans were depicted most often as horrible stereotypes.

I’ve seen that movie; Milestones: African Americans In Comics, Pop Culture And Beyond will not be that kind of show.

Yes, there will me a nod or two to the depiction of those sad and hurtful images. However, this show will be about the vast talent and wonderful innovation that came from or were influenced by African Americans.

From the faceless contributions of those like William Gaines almost 60 years ago to the constant search for African American talent by Mike Richardson to the acknowledgement of contributions by people like Jenette Kahn, Marv Wolfman, Stan Lee and Jack Kirby this show will embrace the totality which is black comics.

Make no mistake; the overwhelming focus will be on black creators and their art. But let’s face it there would have been no Static Shock without the Black Panther.

It’s my hope that the show will feature not just the work of mainstream black creators but also work from those who consider themselves outside the mainstream as well as those who want nothing to do with the mainstream. I’d like the major comic book companies like Marvel, DC and Dark Horse to have sections devoted to them and their efforts to level the racial playing field but also let’s learn from the mistakes they made.

Independent and new companies will be invited to participate as long as the work from that company is quality. Let’s face it; some independent publishers simply suck.

I don’t care if you are the son of Malcolm X. If your work sucks you will not be represented in the show and I’ll keep you out by any means necessary.

Writers from within and outside the comics industry will be called upon to write essays and reflections on the fight for acceptance and the triumph of arriving and exceeding expectations.

In America it’s no secret that African American culture is pop culture so it’s my objective to showcase that. I may fail, I may not be the guy that should have been chosen for this wonderful event but from the bottom of my heart I swear I will do the best I can.