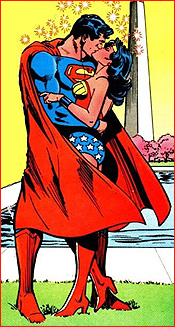 According to Entertainment Weekly, we are about to see a romance between Superman and Wonder Woman. According to the illustration on the site, it looks to be an “adult” relationship.

In some ways, this is genius. DC won’t have to field questions about the Larry Niven issue, since Wonder Woman is invulnerable. Although I’ve always thought Niven’s premise is flawed. There are no holes in the Kent’s farmhouse from Clark’s wet dreams or wank sessions. Or from him spitting.

And, in the current continuity, Superman and Wonder Woman are both the (mostly) sole survivors of lost civilizations. They share outsider status.

In some ways, it’s just another stunt. Look, two of our flagship characters are having sex with each other! No Lois Lane! No Steve Trevor! This is not your father’s DC Comics!

(How desperate is that, since that ad campaign was aimed at your father when he was your age?)

I’ll be interested to see how they do this. The new Superman hasn’t particularly defined himself to me, at least not out of Grant Morrison’s Action Comics stories, which are supposed to be five or so years in the past. I find Wonder Woman a better-drawn character. So much better, in fact, that I can’t imagine how they will write her in a sexual relationship. With Superman.

There is also a really smarmy air to most adult relationships in comics. It is as if sex is such a rare thing that only really cool people can have it. Maybe this was true in high school, but it’s not true for real grown-ups. Grown-ups have sex on a regular basis, most often with someone they like.

In comics, sex is unusual and awesome. One cannot have a conversation of any kind with a sex-partner without referring to sex, whether that conversation is in the office, at breakfast, or in a fight with aliens. I felt like that when I first had sex (in medieval times). It seemed like an amazing secret among me and the people I slept with, like we were in the world’s greatest VIP section. But then I got over myself, and realized that millions of people are having sex at any given moment. It’s one of the things that makes us humans, or at least mammals.

True, not all of them can fly. Maybe that will make the difference.