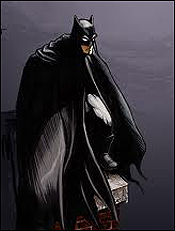 First, check out John Ostrander’s column, found somewhere near the stuff you’re reading, and then imagine me shouting Amen into the Grand Canyon and listen to the seemingly endless echoes and finally consider this a small gloss on John’s work.

John cites the old how-to-write chestnut: Write what you know. Okay, first a slightly snarky hypothesis that’s not intended to insult, or even question, my pedagogical colleagues, just raise the tiniest bump in the dialogue: Maybe those who teach the aforementioned chestnut write what they know because that’s all they, themselves, can write. That’s not a knock: we’re all wired a bit differently and who’s to say that a talent for writing, if talent it be, doesn’t manifest in as many different ways as, say, a talent for music? No good or bad, just different. (Who’s your fave, Mozart or Bob Dylan? Oh – lucky you! – can you dig ‘em both?)

It seemed to me, back when I was giving this kind of matter some thought, that until recently there’s been a cultural bias against imaginative storytelling. “Realistic” (note punctuation) equals good: fantastic equals bad. So Hemingway is a good writer because he wrote about going down to the café in the afternoon to drink the good wine, and Bradbury is bad because he wrote about… Martians and stuff.

Second, a confession that, with any luck at all, will segue into an observation: Despite my having written 200 or so Batman stories, I have never waited on a shadowy rooftop for a heavily armed psychopath to arrive so I can give him such! a smack. I’ve never bent steel in my bare hands or changed the course of mighty rivers either, but I’ve written Superman stories. The Batman stories were easier and more fun.

Here we circle back to the chestnut. I think the reason I was more comfortable with Batman than with the undoubtedly estimable Superman has to do with writing… not what I know, but what I fantasize. Batman lives near my dreams: Superman, not so much. I’ve never daydreamed about having godlike powers – and let’s face it, Superman is a demigod, at least – but I could imagine, oh…running a marathon in 2:10? Punching out that bosun’s mate who clocked me solid at that bus stop in Cuba? We’re talking about feats that are difficult and even extraordinary – he was one tough bosun’s mate – but that are within human capabilities. Did you watch the Olympics this year?

Let’s revisit the chestnut one last time…No – let’s toss it out altogether and substitute a few words from Henry David Thoreau: Go confidently in the direction of your dreams.

Maybe Hemingway dreamed of those cafés. And Bradbury? All those wonderful Martians…