ERROR 451: This Page Has Been Burned 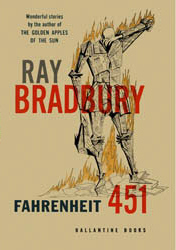 It’s just another average day of internet browsing. You’re doing your thing, checking the news, maybe taking a detour to your favorite webcomic. Then, WHAM (or rather, the internet version of said sound effect).

What happened? Did the servers overload? Did the connection crash? Is the address wrong?

No; this page has been burned.

Error 451 is a new HTTP Error status code proposed by Google developer advocate Tim Bray. The code would pop up the same way an Error 404 code does — except instead of being told a page could not be found, a viewer would be informed that the site is being censored.

The number is an homage to Ray Bradbury‘s Fahrenheit 451, which takes place in a dystopian future in which firemen burn books because the government has declared reading illegal.

According to Wired’s WebMonkey blog, the biggest advantage of the 451 code is that it would explain why content is unavailable — such as which legal authority is imposing the restriction. This would let visitors know that the government, not the Internet Service Provider, is the reason for the page’s malfunction.  Currently, 403 errors are most often used when blocking access to censored pages.

Error code 451 would pop up in situations such as the Indian government’s censorship of the site Cartoonists Against Corruption, which was blocked because its critique of the government was deemed “defamatory and derogatory.”

The biggest problem with the code, Bray admits, is that many governments are not fond of the idea of transparent censorship. So, if we’re lucky — or not? — this code may be popping up in our browsers in the future.

Please help support CBLDF’s important First Amendment work and reporting on issues such as this by making a donation or becoming a member of the CBLDF!