Reminder: Today’s the last day to vote in the 2012 Harvey Awards, hosted this year by Phil LaMarr We want to remind you that voting for the Harvey Awards closes tonight at midnight, so get your votes in now if you haven’t already. Please remember that only comic book professionals – those who write, draw, ink, letter, color, design, and edit comic books and graphic novels – are eligible to vote. All you have to do is go to the Harvey Awards website and vote, quick and easy. Voting turnout seems healthy this year, thanks to the new online voting.

The 2012 awards will be handed out at the Baltimore Comic-Con on September 8th, in a ceremony hosted by Phil LaMarr. We hope to see you there!

Named in honor of the late Harvey Kurtzman, one of the industry’s most innovative talents, the Harvey Awards recognize outstanding work in comics and sequential art. Nominations for the Harvey Awards are selected exclusively by creators – those who write, draw, ink, letter, color, design, edit, or are otherwise involved in a creative capacity in the comics field.  They are the only industry awards both nominated and selected by the full body of comic book professionals. The awards have been presented annually since 1988. 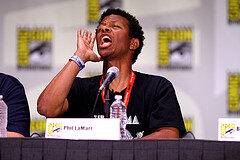 Phil LaMarr is best known as a cast member of Fox’s MADtv, a sketch comedy show based on characters and situations from MAD magazine, which was founded in 1952 by Editor Harvey Kurtzman (namesake of the Harvey Awards) and Publisher William Gaines. The show first aired in 1995 and ran for 14 seasons, of which LaMarr was a cast member for 5 seasons (1995-2000).

In addition to his comedic acting, LaMarr is also an accomplished voice actor for such renowned shows as Futurama, Kaijudo, Foster’s Home for Imaginary Friends, Static Shock, Evil con Carne, Samurai Jack and Justice League Unlimited, as well as recurring roles on King of the Hill, Family Guy, Star Wars: The Clone Wars, Young Justice and The Adventures of Jimmy Neutron.

LaMarr says: “I’m excited and honored to be a part of the Harvey Awards this year, and I am looking forward to meeting many of the people I spend every Wednesday afternoon with.”

The change in host this year from Harvey Award mainstay Scott Kurtz was due to a family conflict. Kurtz, a friend of both the Baltimore Comic-Con and the Harvey Awards, will return in the future.  “Scott worked really hard to make the show this year, and we all understand and respect that family commitments must take priority,” said Marc Nathan, Baltimore Comic-Con promoter.  “Scott is always welcome here in Baltimore!”