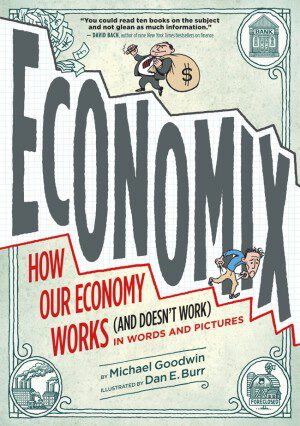 Having never taken economics in college, I find the world of high finance needlessly complicated and confusing. You spend what you need to make a good; you sell it for a reasonable profit. Repeat. The problem, though, is that the world makes it far more complicated to determine how those goods are made or what a reasonable profit might be. And as globalization has altered the way everyone on Earth lives and works, things have grown ever more complex.

Thankfully Michael Goodwin saw the need for a basic primary on how the economy currently works and how we got here. Better, he decided to really make it easy to follow thanks to using the comic format, hence the graphic novel Economix. Nicely illustrated by Dan E. Burr, best known for Kings in Disguise, the book from Abrams starts off in The Distant Past and walks us on a parallel path between what really happened and how the early economist philosophers thought it should happen.

Along the way, Goodwin makes it clear that for too long, people hewed to theories that sounded great on paper but were impractical in the real world which is why the early bubbles occurred. He also introduces us to the keep economic and political players, and how he talks about them makes it clear which ones he finds laudable and which ones deserve mockery.

This is not a classroom textbook but has a distinct point of view so the result is that some people and events have their dimensionality stripped away, leaving a caricature to make his point. This trait is on display beginning with the Industrial Revolution all the way through the modern day economic woes (the book’s information is nicely current through mid-2011 so it remains relevant).

He makes it clear that the bigger corporations got, the less and less they were to be admired. Instead, they prove to be the villains you expect in graphic fiction and while there’s a lot here that’s true, it’s certainly just one point of view. Goodwin is also harsh to many people, notably Calvin Coolidge and Warren G. Harding, who watched America’s economy grow, burst, and couldn’t figure out how to pick up the pieces. Using their own words against them, certainly sounds convincing.

Where Goodwin excels is simplifying the verbiage so even guys like me can follow it. He also pauses to show what is happening around the world, since opening trade with Asia or the Russian Revolution certainly had a bearing on American dollars and cents. The book also doesn’t expect you to remember everything, constantly pointing you back to relevant pages such as “That’s right – we live in a mixed economy, not in pure capitalism. For instance, let’s take another look at modern New York. We saw on page 24 how trying to control everything wouldn’t work…”

Obviously, the most interesting chapters are the ones covering the times we live in. The book pointedly takes us from Reagonomics through the housing bubble, pausing to chart how our National Debt has grown through various presidential administrations and the decisions they made.  Paul Volcker and Alan Greenspan both get taken task in this recounting. Clearly, today’s mess began in the 1980s and continues today.  A large part of the problem was the repeal of the 1932 Glass-Steagall Act in 1998 and today, many a politician and businessman has come to regret that – note the comments sandy Weill made last week.

Burr’s artwork nicely captures the text and makes it visually comprehensible with some fun portraits of how the economic machinery works, using iconic images of farmers, merchants, businessmen, and so on. He caricatures key figures and keeps his pages packed but not cluttered. On just a few cases his page layout and balloon placement challenge even the most veteran of comics readers so this might be a tough read for some novices but its well the effort.

A text like this would certainly help high school and college students gain their first taste of financial literacy and it comes recommended for the rest of us.