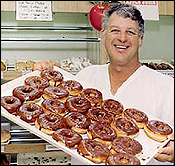 It was an interesting party. Held in a Mason lodge, I got to hang out with The Point’s Mike Raub, former ComicMix columnist and book writer and moviemaker Ric Meyers, and Adriane Nash, the one woman condemned to be both a ComicMixer and an employee of arrogantMGMS. And a whole bunch of old friends, about 72 of which used to be in the comic book retail business.

It’s not that I would be friendless if not for the comics racket. Since I spend a healthy amount of time in politics, social services, broadcasting and more dubious endeavors, I know a few folks who couldn’t tell the several dozen current Spider-Men apart – and politely couldn’t care less. They humor me nonetheless.

But it is safe to say most of my enduring friendships are comics-related. I’ve known Mr. Raub for, damn, three-dozen years. Glenn Hauman and I met when he was a “small” child hiding in DC’s darkroom, back when the Earth was still cooling. John Ostrander and I have been buddies since before Watergate; we met through Chicago theater connections and were both herded into a corner at a party in those ancient days because, as comics fans, we “had something to talk about.” Ah, those days when geeks were treated like… geeks.

The list goes on and on. I’ve had the privilege and honor to work with my friends and that has worked out wonderfully more than 99% of the time. There are maybe only two or three people I regret working with – I’ve mended fences with others; creative egos are a mixed blessing and I’ve got one that’s louder than a Sousa march. There’s only one person in comics I actually wish to murder; I’ve spent less time and energy in broadcasting and that list is both longer and older.

So this comics donut shop, to paraphrase Chico Escuela, has been berra berra good… to me.

I’m all backward-looking because this Saturday is my birthday – I turn real, real old; I mean, Mel Brooks old – and seeing all these old friends in one room was a heady event.

Despite its massive expansion (says the man who refers to the San Diego convention as the “black hole of media shows”) and the generational differences and the public’s near-acceptance of geekdom, there remains a closeness in the comics community that, to my experience, is unparalleled elsewhere. Even people who truly hate each other are on a first name basis.

I highly recommend it. This is one hell of a donut shop.