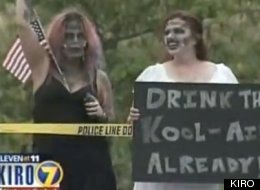 A Westboro Baptist Church protest was overshadowed Friday when demonstrators dressed as zombies gathered at a DuPont, Wash. military base to counter the radical group’s efforts.After members of the controversial Kansas-based church announced plans to picket Joint Base Lewis-McChord, a military base south of Seattle, 27-year-old Melissa Neace decided to organize a counter-protest, launching a Facebook group titled “Zombie’ing Westboro Baptist Church AWAY from Fort Lewis!”

“We wanted to turn something negative around, into something people could laugh at and poke fun at,” Neace told the News Tribune. “It was the easiest way to divert attention from something so hateful.”

About 300 counter-protesters showed up in varying degrees of zombie garb, far outnumbering the picketers from Westboro. According to KIRO in Seattle, just eight protesters from the controversial group showed up.

“I think that their message is very hateful, and Jesus was not a hateful person. He loved everybody,” one of the counter-protesters told KIRO.

And hey, Jesus came back from the dead too, so not only does he love zombies, he qualifies as one. Doesn’t it say, “For God so loved the world, that he gave his only begotten Son, that whosoever believeth in him should not perish, but have everlasting life”? God makes zombies all the time!

We can only hope for such creativity when the Westboro Baptist Church goes to Aurora, Colorado.