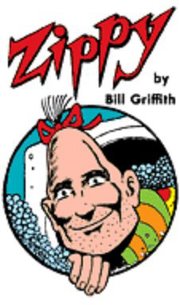 Tonight, a Master Class with Bill Griffith, creator of Zippy The Pinhead:
GRIFFY’S TOP 40 LIST ON COMICS AND THEIR CREATION:
The Daily Life of a Working Cartoonist: Pencilling, Inking and Making People Laugh, Maybe.

Subjects discussed by legendary comix creator BILL GRIFFITH in this class will be: Creating a cast of characters (one of which may be yourself) and learning the language of comics (writing, humor, pacing, finding your voice, understanding panel and page composition as well as specific hints on drawing in pen & ink).

Attendees may bring photocopies of a small sample of their work, which Bill will critique after the class via email. There will also be a question and answer period at the end of the class. Feel free to ask anything except how to draw superheroes.

BILL GRIFFITH is the creator of the “Zippy the Pinhead” daily comic strip, seen in over 150 newspapers and newspaper websites. “Zippy” has been nationally-syndicated since 1986, by the first and oldest comics syndicate, King Features. Griffith got his start in the underground comics scene in New York and San Francisco in 1969, contributing to dozens of comic books and magazines throughout the last four decades. Fantagraphics Books has just published a collection of Griffith’s early underground work, [[[Bill Griffith: Lost and Found: Comics 1969-2003]]].