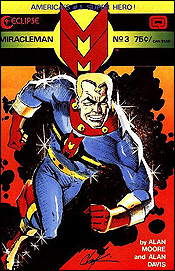 My original First Comics partner Rick Obadiah, who is not prone to outrage (I took care of that part), sent me an email a couple days ago expressing his pissed-offness at a piece in last Sunday’s New York Times.

For those who don’t have time to click-through, the Times essentially gives credit for the whole creators’ rights movement to Image Comics, now enjoying their 20th anniversary. I have no axe to grind with Image and I don’t think Rick does either; this is another case of typically sloppy reporting from the fantastically over-important New York Times.

In his email, Rick correctly points out that the stuff attributed to Image Comics started with First and with the other so-called independent publishers of the time: Eclipse, Comico, Now, Malibu, and others too numerous to name. I won’t quibble with the definition of “independent” – back in those days the term really meant “not Marvel/DC.” The Comics Buyers Guide even listed Disney Comics as “independent,” and that was the day I stopped using the term.

As I pointed out nearly 30 years ago in the pages of sundry First Comics, the creators’ rights movement on a publishing level started with Denis Kitchen and his fellow “underground comix” providers. The actual creators’ rights movement pretty much started on Day Two of the comic book industry when folks like Will Eisner, Bob Kane, William Moulton Marston and Joe Simon and Jack Kirby negotiated their own deals with the existing publishers and retained certain rights and/or received cover billing and/or creator credit and/or royalties.

But we – First, Eclipse, Comico, Now, Malibu, and the rest – took all that several steps further. Creators received certain ownership rights, cover billing, creator credit and royalties. Perhaps that was tame by today’s standards, but in 1983 this was akin to torching the Great Teat. We paid a price for this: all of those companies are now extinct, although some lasted nearly two decades – a good run in publishing. But we had nothing to take to the bank in terms of actual ownership when times got rough, when distributors went out of business and when investment-mania boiled over.

Once we started offering fair deals, DC and Marvel pretty rapidly started offering some of these rights under certain circumstances. That didn’t make them competitive on the creators’ rights front, but they provided acceptable safe haven to creators when times got rough on the independents front. And that includes me, and I am not ungrateful.

Did Image take this one step further when they went into business a decade later? They goddamn well should have and, yes, of course they did: the company was started by a half-dozen of the top writers and artists in the field. But Image isn’t a publisher in the traditional sense – to its credit, it’s more of a vanity press without the negative connotations of that term.

Image – and Dark Horse and more recently IDW and Dynamite – were built on the shoulders of the founders of First, Eclipse, Comico, Now, Malibu and the rest, and on our investors and our creative talent who took big risks breaking from the clutches of DC and Marvel without any guarantee those doors would reopen for them should the desire arise.

Again, I do not blame Image in the least. I blame the lazy, self-important “journalists” at the New York Times for having a historical point of view that fails to go beyond recently emailed press releases.

Here’s a secret. It is well known that the New York Times has never run comic strips. But this was not because comics were too lowbrow and well beneath their dignity. That was just their typical arrogant posturing. The New York Times didn’t run comic strips back when Pulitzer and Hearst started the medium because they couldn’t afford the fancy color presses. The paper of record, indeed.