Peter David is “Pulling Up Stakes” 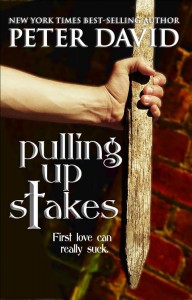 Fans don’t always realize how much of what they get to read on the marketplace gets out there despite publisher preconceptions.  History is filled with any number of books, ranging from A Wrinkle in Time to Confederacy of Dunces to Harry Potter, that hit the market and left in their wake a host of rejections from various editors because the stories didn’t fit in with what they were looking for.

Pulling Up Stakes first made its presence known at various conventions when I first started working on it.  I’d read sample chapters and enthused audiences begged to know when it was going to be done so that they could find out what happened next.

Yet when the book was circulated to editors, the reason for their passing on it were impressive, to say the least.

Pulling Up Stakes tells the skewed tale of Vincent Hammond, a twenty-something vampire stalker, who lives with his domineering mother in a small community of hunters tracing their lineage back to the French Revolution.  Vince, however, has a rather singular problem:  he’s a vampire.  And if his mother finds out, she’ll kill him.  Literally.  So he doesn’t dare come out of the coffin, so to speak and keeping his secret becomes further complicated when…

Well, we’ll get to that at a future date.

Little did I, or the fans who have loved the readings up to that point, know that that Pulling Up Stakes violated too many rules of the genre.  Editors who rejected it, however, didn’t hesitate to explain the problems.

First, if you have a vampire story, you have to have a female protagonist.

Third, humor doesn’t sell.  So apparently you’ve doomed yourself when your vampiric narrator says things like, “Sparklepires?  Come on.  Real vampires considered the Twilight books to be such a loose flow of unmitigated crap that they were typically referred to as ‘Vampirrhea.’”

So apparently by writing a humorous vampire story with a male protagonist, I managed to hit the trifecta of hopelessness.  No publisher would touch it.

And as you, dear reader, work on prying your slack jaw off the floor, consider how nice it would be to send a message to the publishers that maybe, just maybe, thinking outside the box now and then might be a nice idea, by letting everyone know that Pulling Up Stakes is going to be making its debut at Crazy 8 Press in just a few weeks.  Because you can’t keep a good undead man down.