Marc Alan Fishman: Flame On! Being Gay In Comics 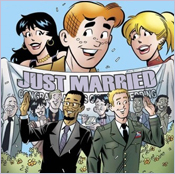 Over at my Unshaven Comics facebook page (shameless plug, shameless plug), I wanted to tip the scales of our “likes” from the paltry 320 to 400 by the end of the summer. So, I begged and pleaded with our fan-base to pull in some like-minded friends to come like us. One of our fans (who I can safely say is in fact at this point just a friend… who happens to like my writing and art) joked with me about what I might do to see those extra 80 or so fans by the end the week. Well, I responded the only way I knew how; Shamelessly.

I told him “get me to 400 fans by the end of the week, and I’ll send you a topless calendar of me and Matt (also of Unshaven infamy). Did I mention this fan is gay? Well, he got the joke. And two days later we were at 407 fans. And I’d stand to guess at least 70 of them were “Bears.”

For those who don’t know, “Bears” are a subgroup of the larger gay community. They identify themselves as being burly dudes with a fondness of facial hair. Ruh-roh. Lucky for me, these new fans weren’t just “liking” our page because of our beards or promise of sad, sad, sad photographs. Turns out they like comics too. And with that we finally reach our topic.

Every six months or so it seems the comic book community gets its rainbow panties in a knot over yet-another gay issue. As always, the media jumps all over it, and certain homophobic fans shake their fists in the sky. “That’s not my Captain Wizz-Bang!” they shout, at absolutely no one. Most recently, Alan Scott (that’s the Golden Age Green Lantern, you know) came out in Earth 2. The idea behind the sexual orientation shift? According to writer James Robinson, it was pretty cut and dry. To paraphrase? He said that since Obsidian, Alan Scott’s gay son (from the now defunct DCU), wasn’t welcomed to the New 52, he decided this was a way to balance that fact. Simply put? That’s the perfect answer. In essence… Why Not?

Last week, I made light of this fact, but perhaps misrepresented my real issue with the “announcement.” Not from Robinson per say… but from the media’s need to jump on the story, and try to squeeze blood from a turnip. The fact that DC responded in tow, rainbow suspenders ablazin’ only fueled my fire worse. Sure, any publicity is good publicity… But when will we stop sensationalizing the sexual preferences of our ink and paper celebrities?

As a fan, I ultimately don’t care one way or another if a character is gay, straight, bi-sexual, trans-gendered, or completely asexual. If it makes for a good story? Then let it happen. If it’s done for shock value? Then we don’t need to talk to one another.

This in and of itself is an issue, though. It’s hard to tell when the choice is made, or mandated from on-high. We’d like to believe that a character’s sexual preferences are decided by writers and artists because it has relevance. At the end of the day though? All comics are tied to their makers by way of a purse string. Sometimes, in the worst times, using the “gay” card is more for shock value and the chance of increased sales. And in those times? I’m as offended as any other fan, gay or straight.

Being gay, be it in real life or a comic, is very much a part of one’s identity. Whether they are out and proud (say like the Teen Titan, Bunker) or more understated (like Xavin from Marvel’s Runaways)… I’m pretty proud to say that comic books today are truly promoting a diverse representation of the real world within their fictional universes.

What gets me in a tizzy is just why the media needs to make a big deal over it. Is it “news” when Anderson Cooper or Jim Parsons comes out of the closet? No. Neither is it “news” when Alan Scott, Hulking, or Wonder Woman decides to lay with they fellow man or woman. Will it be news if Unshaven Comics decides to have a gay character? I doubt it.

Not to beat the dead gay horse on this one folks, but it couldn’t be clearer. Sexual orientation isn’t the issue when it’s written well. Hell, even when it’s written poorly. For those sad individuals who can’t get past a person’s predilection for their same gender, well, I gladly welcome you to sit in the corner and sulk. With each passing generation, we accept more, we tolerate more, and we learn to care about other more important issues. Like reboots. And why they are needed from time to time. But not most of the time. But I digress.

In case you’re curious? Unshaven Comics does have a gay character in our books. But we’re not telling who. Why? Because until it matters in a story… It’s not worth our time or yours making a big deal about it. Flame on.

SUNDAY in the Dark with John Ostrander