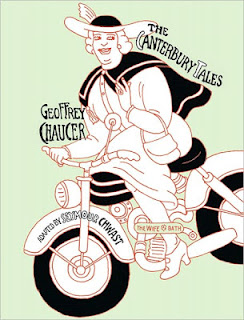 Yes, that credit does have the faint whiff of “by William Shakespeare, additional dialogue by Sam Taylor” to it, but it can’t be helped. Anything needs to be adapted if it’s going to work in another medium — which is a big “if” — and having it done by one person, who then lays out and draws the thing himself, is about as pure an auteur case as you can get.

And it’s not as if most people encounter The Canterbury Tales in their pure form, anyway — when I read them, way back in college years, my class was atypical in using an edition with Chaucer’s original spelling and grammar, but even we read an abridged version. The full-on Early Modern English Canterbury Tales has been primarily for scholars for generations now, so any time it comes close to a mass audience — which is not that often — you’re looking at an adaptation.

Chwast does Chaucer well with his adaptation of The Canterbury Tales

— he does have them riding motorcycles, but otherwise doesn’t modernize the occupations or the world — these stories are still told by a Pardoner and a Franklin, a Clerk and a Reeve and a Manciple, and take place in their own times and places. Chwast does use modern spelling, and clearly uses only a fraction of Chaucer’s text, but he keeps enough to give the sense of Chaucer’s world, obsessed with religion almost as much as sex or honor. (Maybe it’s not all that different from our own, after all?)

Chwast came to graphic novels late — this is his second, after an adaptation of Dante’s Divine Comedy

— after a long career as a noted graphic designer and illustrator. And his Canterbury Tales is well-designed, but not as overly designed as I was worried it would be. Chwast’s line is stiff and illustrative, giving all of his pages the look of bas-reliefs; his panels aren’t windows into a world of story but clearly pictures, drawn and placed just so.

This is admittedly an odd book — an adaptation of a classic most readers never think about, into a format most serious readers still scorn. It’s certainly quixotic, but admirably so — Chwast clearly enjoys Chaucer, and wants to share his love with the rest of us.