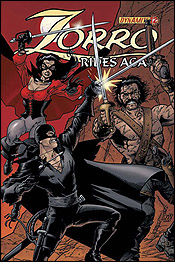 Last week I bitched and moaned about how we’ve turned our backs on comics that can be appreciated by readers of all ages in order to follow the money that kids ain’t got and some adults might have. I also tied this into continuity impenetrable to newcomers that is spread over about a hundred dollars’ worth of monthly product. I can be snotty that way.

In just the past couple of years, we have seen something of a return to comics that can be enjoyed by readers young and old. Publishers can’t help the self-consciousness suffered by Baby Boomers and some Gen-Xers, but today’s new middle-agers were raised without much of the stigma us old folks suffered during the Wertham rage. So, I am now taking it upon myself to point out a few titles that work for a general audience that is fearless enough to read comic books on the bus, be it to work or to school.

I’ve been quite impressed with Dynamite’s Zorro Rides Again, written by Matt Wagner and drawn (now) by John K. Snyder III. That’s quite a pedigree, and their work lives up to it. You do not have to be steeped in a century of Zorrodom to understand what’s going on: it’s all about a revolutionary with a sword on a horse who fights Spanish oppression in the name of the people of California. Solid action, great storytelling, and an even greater story. You can’t go wrong here; it’s a damn fine book.

Image Comics has been running a little superhero series called Savage Dragon for almost 20 years now – the main series is up to issue 180, for crying out loud – and there’s a reason why writer/artist/creator Erik Larson’s work has endured: it deserves to. Yeah, it’s all about a big hyper-muscled green-scaled head-finned superhero; what’s it to you? It’s chock full of solid characterization and mayhem alike. I think it appeals to the same sort of 11 year old that found Marvel Comics so accessible and so exciting a couple generations ago as well as to older readers get a solid comic book experience that isn’t fraught with sturm und drang. The real old farts will be reminded why we liked comics in the first place without having to hit up 50ccs of nostalgia.

The real surprise here comes from DC Comics. While all the focus and attention has been on the New 52, a line too interconnected and too continuity convoluted to access the broader spectrum of readers, over on the West Coast their editorial operation has been publishing a nice little self-contained universe of superheroes in a continuity that had its roots in a teevee series cancelled long ago. The book is called Batman Beyond Unlimited and for those who are unfamiliar with the proto-show it’s The Old DC Universe – The Next Generation… except some members of the original generation (Bruce Wayne, Kal-El) are still around.

There’s three different series going on in this giant-sizedish monthly: Batman Beyond, Superman Beyond, and Justice League Beyond. The latter group has Superman (the original, a man out of his time), Batman (Terry McGinnis, although Bruce Wayne is still around and more cranky than ever), Warhawk – the son of Hawkgirl and John Stewart, as well as contemporary versions of Green Lantern, The Atom and others. They back-fill the origins while remaining constant with previously established continuity, but – and this is why it works – you don’t need to be Mark Waid to understand who’s who, what’s what, and how everybody got that way. Available as weekly downloads in individual series titles or in the Batman Beyond Unlimited monthly, by avoiding the grim and gritty wallowing in apocalyptic hopelessness, this is a title that can be enjoyed by all but the most anal-retentive cynic.

And when was the last time I wasn’t the most anal-retentive cynic?