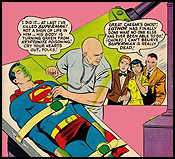 At a convention I was at some years past I was having dinner with, among others, Howard Chaykin and Joe Rubinstein. Howard is always an interesting dinner companion; whether you agree with him or not on a subject, the conversation is going to be interesting. I didn’t know Joe Rubinstein much before that – except by his talent – but he raised a serious point with me. Joe knew about my late wife, Kim Yale, and her death and what he was interested in seeing coming from me was a story or stories about how you cope with the grief and the mourning that comes with the death of a loved one. It’s an interesting challenge and, while I’ve had some ideas about how to do it, I have yet to answer it.

I don’t think that comics, as a medium, deals well with death. It’s become a plot device, a sales gimmick, since we all know the character who has died is going to be back. I was staggered at the time of the Death of Superman storyline and by the number of people I knew who contacted me and breathlessly asked, “Is he really dead?” I pointed out that DC had too much money to lose from Underoos alone to let Kal-El stay dead.

Sure enough, Superman got better.

I will say that DC dealt well with the aftermath of Superman’s apparent demise in the World Without Superman follow-up storyline. There was real feeling, real emotion, by individuals and by the general population. And life went on without Superman.

That’s what happens. Your world ends; life goes on. The one you loved doesn’t come back. You cope however well or badly. You recover or you don’t.

I’m not saying that killing off a character can’t be effective or shouldn’t be done. When I was doing Suicide Squad over at DC, I was something of a literary mass murderer. I killed off lots of characters – mostly villains. I even killed off my own GrimJack character and brought him back albeit in a different, cloned body. I then reincarnated him somewhere further down his own timeline and, eventually, killed off that incarnation as well. So, how is that different, you ask.

Reincarnation doesn’t give you back the same body; it gives you a different one. The resiliency of the Doctor Who series rests on the title character’s ability to regenerate or reincarnate. Completely different actor, very different personality traits. There is change. That’s the difference and a key one.

Over at Marvel, the Pearly Gates is a revolving door. Captain America dies; oops, he got better. (Okay, it was really a “time bullet” but it was sold as the death of Captain America.) His teen sidekick in WWII, Bucky, dies in action. Oops, no, he gets better decades later. Both “deaths” generated interesting stories but is there anyone who really thought that the original Captain America wasn’t coming back?

Actions have consequences and death does as well. Grief should be shown; tears should flow. One of the major flaws, for me, of the first Star Wars film is that Luke barely sheds a tear at the death of the only parents he’s really ever known but then gets mopey about a mentor he’s known only a few days. Whereas, in the Harry Potter films, especially the later ones, when a character dies we see real grief and sorrow. It matters to the characters and therefore matters to us. And, yes, Harry dies and comes back to life but that doesn’t change my argument. His death grew out of the story and was, in fact, demanded by it; it was the way to resolve the story. That includes his resurrection. My gripe is with deaths that simply are “events” and meant to push sales.

Monday: Mindy Newell and how she got that way.