Pro Se Productions, Publisher of New Pulp and one of the leading companies in what many refer to as The New Pulp Movement, proudly announces the release of the first collection of the adventures of the First Lady of New Pulp- “The Pulptress” is now available in Pro Se’s digest size! 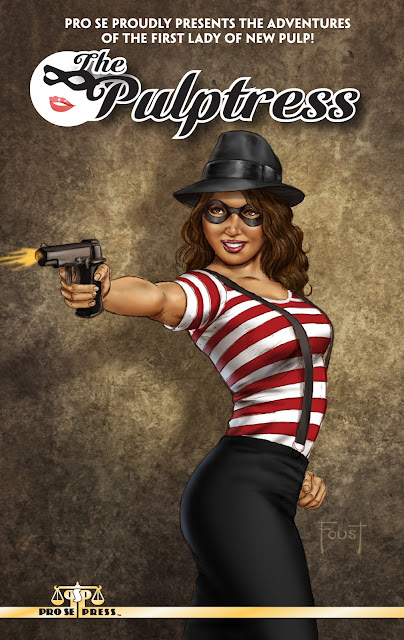 She appears, an enigma, a guardian angel in a mask and fedora, her past shrouded in mystery. Where did she come from? What secrets in her past drove her to become a crusader for justice? Who is The Pulptress? This masked woman of mystery, makes her debut on the New Pulp scene in a collection of stories sure to thrill and amaze you. Leading off with an introduction by The Pulptress’ creator, Tommy Hancock, this collection features stories by Terry Alexander, Ron Fortier, Erwin K. Roberts, Andrea Judy, and Tommy Hancock! With a fantastic cover by Mitch Foust and beautiful design work by Sean Ali, this collection is a must have! It’s time You met The First Lady of New Pulp! The Pulptress! From Pro Se Productions!
Originally conceived by Hancock as a character to represent New Pulp and Pro Se, The Pulptress quickly came to life, both as a vibrant real person portrayed by Pro Se’s own Megan Smith at the inaugural Pulp Ark Conference/Convention in 2011 and not long after that in the form of ideas and stories from the authors featured in this collection!  Several tales also feature well known New Pulp guest stars alongside the Pulptress, including Derrick Ferguson’s Dillon, Ron Fortier’s Brother Bones, and Erwin K. Roberts’ The Voice!
Pro Se Productions presents ‘The Pulptress’ as the first of many books and collections that will appear in a digest format!  Get your copy today for $6.00 from Amazon at http://tinyurl.com/c3v9599 or directly from Pro Se’s own store at http://tinyurl.com/7yyoeal !  Ebooks coming soon! 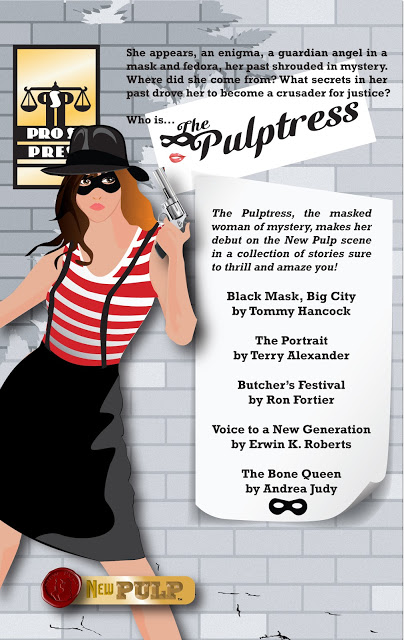 Check out Pro Se Productions at www.prosepulp.com and www.pulpmachine.blogspot.com!
Share