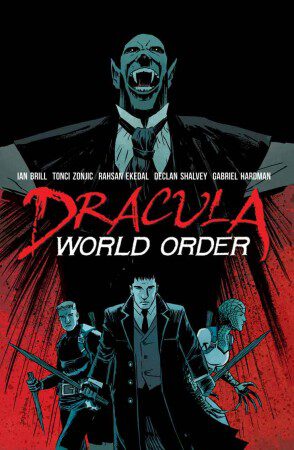 Former BOOM! Stuidos exec/writer Ian Brill has been teasing us all week with some images and today he finally unveiled what he’s been up to. His new book is bypassing the Diamond distribution system and while he’s not alone in this bold step, he is one of the ore high profile people doing this. Here’s the formal release:

June 8th 2012 – Los Angeles – When Ian Brill set out to write a new vision of Dracula, he called on some of the greatest talents in comics to bring it to life —Tonci Zonjic (WHO IS JAKE ELLIS?), Rahsan Ekedal (ECHOES, SOLOMN KANE), Declan Shalvey (THUNDERBOLTS, 28 DAYS LATER), and Gabriel Hardman (HULK, BETRAYAL OF THE PLANET OF THE APES). This June 13th, comic fans everywhere can find DRACULA WORLD ORDER at select retailers across the North America and exclusively worldwide digitally on comiXology across their entire platform including iPhone, iPad, Android, Kindle Fire and the web.

Following in the foot steps of Sam Humphries’ OUR LOVE IS REAL and SACRIFICE, Ian Brill’s DRACULA WORLD ORDER is self-published by the author and is offered digitally on comiXology while at the same time a very limited 300 copy print run will be available from these retailers:

Featuring an all star cast of today’s best artists and written by Ian Brill, DRACULA WORLD ORDER tells the story of how the greatest villain of all, Count Dracula, takes advantage of a world on the brink of economic collapse. In a world where the top 1% of the population are vampires, the rest of the human race are prisoners…or the 1%’s next meal. Dracula’s own son Alexandru leads the 99% in rebellion against the Vampire elite – in a battle that will leave you breathless.

Within four startling chapters Tonci Zonjic (WHO IS JAKE ELLIS?), Rahsan Ekedal (ECHOES, SOLOMN KANE), Declan Shalvey (THUNDERBOLTS, 28 DAYS LATER), and Gabriel Hardman (HULK, BETRAYAL OF THE PLANET OF THE APES) bring their amazing talents to Brill’s story. With Zonjic, Jordie Bellaire (BETRAYAL OF THE PLANET OF THE APES, FANTASTIC FOUR), and Stephen Downer (DRACULA: THE COMPANY OF MONSTERS, DRACULA THE UNCONQUERED) bring searing color art, with the amazing Josh Krach lettering the book. All of this under an amazing cover by Shalvey and Bellaire.

“This would be incredibly cool even if it didn’t have some of my favorite artists working! Brill is making one of those books that get me excited about comics, and I would like to read a lot more of this. Read DWO and spread the word, this is the real deal!” says Jeff Parker, writer of HULK and THUNDERBOLTS.

Brill will be celebrating the release of DRACULA WORLD ORDER is dual signings on the release date.  He will be at Beach Ball Comics in Anaheim, CA from 12-2 and Collector’s Paradise in Winnetka, CA from 5-8.