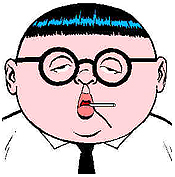 Call comics “the little issues that could?” Or maybe the “phoenix of mediatown?”

At least twice in my long – ye gods! – long association with the form, I thought they were going down. Not all the way down: I thought, sure, comics will survive, the way poetry and harpsichord music has survived, as entertainment for aficionados, the loyal few who are willing to make a sacrifice or two to keep something they love alive. But as something vaguely resembling a mass medium? Huh uh.

Comics’ first decline began in the late40s-early 50s, after a lot of self-righteous souls and maybe a few who were just plain ambitious condemned the funnybooks as either amusement for the mentally challenged or the devil’s pulp, luring the nation’s youth into wicked thoughts and, Lordy, Lordy, who knew what kind of naughty behavior? Dozens of publishers bit the big one and those that survived barely survived.

In the mid-seventies, when general interest magazines were virtually extinct – wha’d I do with my latest issue of Collier’s, anyway? – and it was becoming harder and harder for a kid to get his monthly Batman (Spider-Man, Herbie the Fat Fury, et. al.) because the small stores and newsstands where a kid could find his favorites were also becoming extinct, that crazy New Jerseyite Phil Seuling and a few like-minded visionaries created the direct market and suddenly comics had what Colliers and the other slicks and the pulp fiction magazines didn’t have: a place to sell the stuff. The direct market was a direct descendant of fan activities – the clubs, the conventions – and so, takes a bow, fans. You did your bit.

About a decade later, comics’ suffered an artificial boom when innocents with disposable income were led to believe that comics were investment: buy a hundred copies of Spawn #1 and put yourself through college! Well, no. It took the world about four years to realize that while Action Comics #1 could fetch over a hundred K at auction, it was mostly because there weren’t many copies left on the planet. It wasn’t hard to find a copy or two of the first Spawn. The boom was bust and some publishers vanished and the survivors suffered, having swollen to a size that accommodated the boom’s demand and was too big and too costly for the bust.

When I walked out of an editor’s office for the last time, a dozen years ago, I wondered if I wasn’t feeling the deck list beneath my feet. But, no. The news is that comics are again on an upswing, moving into the digital age, learning from past mistakes, benefitting from enormously popular film adaptations.

Okay, sooner or later comics publishing will end. But so will you and so will I.