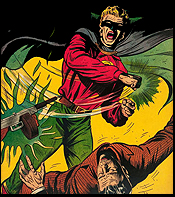 Just as life is drifting into a lull, I can always count on Fox News to provide entertainment by going disproportionately apeshit. Case in point:

DC Comics made a big whoopdeedoo about one of their top characters coming out of the closet. Immediately, our friends at Fox said “It’s the end of the world! Superman is gay! Superman is gay!”

They were subsequently told Superman is not gay. Don’t tell Rick Santorum, but that caped dude Lois Lane’s been sleeping with is actually a strange visitor from another planet.

They were subsequently told Batman is not gay. Perhaps they were also informed that psychiatrist Fredric Wertham beat them to that bullshit story over 60 years ago.

DC finally came clean and, as you undoubtedly know – particularly those of you who have been to your friendly neighborhood comic shop today – it’s Green Lantern who is gay. No, not the guy from last year’s unwatchable movie or the guy from this year’s better-than-expected CGI teevee series, not the black guy who was in the Justice League teevee show and has his own comic book and has been around for several decades, and not the guy with the Moe Howard reject haircut who was in the Brave and the Bold teevee show and also has his own comic book. Nor is it one of the hundred thousand or so space alien Greens Lantern. Nope. None of them.

It’s Alan Scott. The original Green Lantern. So original he predated the Green Lantern Corps by almost 20 years. The old dude who was ret-conned out of existence last year. Now he’s been reintroduced as a gay man.

The story received some press, much of it just shy of ridicule. Each piece I read was careful to point out that Alan Scott was not the guy in the comic books or in the movie. Each piece I read tried to justify its newsworthiness but came short. For good reason.

Showing the fourth-string (at best) Green Lantern to be gay is less than no big deal. Hal Jordan, yes. That would be a big deal. Barry (Flash) Allen, certainly. Wonder Woman, absolutely. Any one of what Warner Bros. refers to as the “family jewels” would have been newsworthy.

Gay characters in comics are no big deal. We introduced an ongoing, major gay character in Jon Sable Freelance in the early 1980s; having super-macho Sable deal with the revelation was unique for its time. A few years later, Marvel’s Northstar came out. Not a household name (nor was Alpha Flight – but the X-Men were), but a big deal for the time. Last week, Northstar got engaged, which was pretty cool. Over at Archie Comics, they introduced a gay character that Veronica Lodge fell for. That was an amazing story, a very courageous move for Archie because it is almost totally dependent upon newsstand sales and therefore was taking a risk of tainting its brand. Quite the opposite happened: Kevin Keller graduated from supporting character to mini-series star to his own title, all within a year.

In the face of growing acceptance of same-sex relationships, DC revealed its spinelessness by outing a character few people have heard of (you’d have to have been collecting social security for years for you to have been a reader of All-American Comics) and even fewer people care about. There was no risk of an Alan Scott movie or television series, no action figures at Toys R Us or Wal-Mart, no ancillary revenues put in jeopardy.

This is not a knock on the creative talent involved: James Robinson has been one of the best writers practicing the craft today and he’s held that status in my fanboy brainpan for quite a while. I don’t know if Alan Scott’s still got those kids; there’s no reason why he shouldn’t but that would show more guts than DC has offered thus far.

It is not DC Comics’ job to bring truth and justice to the American way. But making such a big deal over such a small event is just pandering.