E.T. Comes to Blu-Ray in October 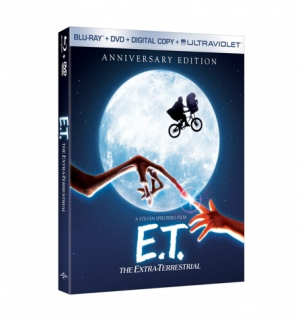 Hard to believe it’s been thirty years since that magical summer when tons of great films were released including Steven Spielberg’s E.T.: The Extraterrestrial. The film will celebrate the occasion with several events beginning with an exclusive airing Friday on The Hub on at 9 p.m.

It’s the season of Spielberg, it seems, as first Jaws, then E.T. and the Indiana Jones films finally make their Blu-ray debuts. The sea thriller will be out in August while the other two are scheduled for October releases.

Here are the E.T. release details from Universal Home Entertainment:

Universal City, California, May 30, 2012 – E.T. The Extra-Terrestrial, Academy Award®-winning director Steven Spielberg’s magical adventure, celebrates its 30th Anniversary with its first-ever release on Blu-ray™ this October. Featuring an all-new, digitally remastered picture that delivers six times the resolution of DVD, as well as all-new 7.1 surroundsound, the E.T. The Extra-Terrestrial Anniversary Edition Blu-ray™ Combo Pack includes the 1982 theatrical movie, an all-new interview with director Steven Spielberg, and “The E.T. Journals” featuring never-before-seen footage from the set of the film. The Blu-ray™ Combo Pack also includes UltraViolet™, a DVD and a Digital Copy of the film, offering fans a chance to relive the mystery, laughter and wonder of the iconic movie anytime, anywhere on the platform of their choice.

“When E.T. The Extra-Terrestrial premiered in 1982, it captured the imaginations of people young, old and everyone in between in a way that was unparalleled in modern movie history,” said Craig Kornblau, President of Universal Studios Home Entertainment. “A global cultural phenomenon—and the biggest box-office blockbuster of its day—E.T. brought out the child in all of us. We are thrilled audiences will now be able to experience the film in the astounding quality of Blu-rayTM.”

BONUS FEATURES ON THE BLU-RAY™:

BONUS FEATURES ON THE DVD:

Universal is also partnering with leading independent games publisher Chillingo to publish E.T.: The Green Planet for the iTunes App Store. Inspired by a novel based on a story by Steven Spielberg, players travel with E.T. to his home planet, explore and build extraordinary intergalactic botanical gardens, and share their experiences with friends.