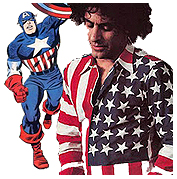 Captain America, Abbie Hoffman and the sexy statue in the women’s department? What the heck do they have in common?

Hey, everyone, it’s Memorial Day here in the beautiful lower Hudson Valley and if we venture out into the sunshiny pre-summer day, we’ll be seeing some flags. Flags flapping from flagstaffs, flags draped on the front of houses, flags on cars and maybe shop windows and if we drive west, toward New City, we’ll see flags – a lot of flags – displayed along the road that passes over the reservoir because somebody – I have no idea who – hangs them from roadside poles there.

Maybe I’ll even throw them a salute or two, those flags, for old times sake. (At one point, my life was full of salutes. Not so much anymore.)

The other day, en route to a department store escalator, I passed a curvy mannequin clad in a bikini that seemed to be fashioned from, yes, a flag. I didn’t salute – hell, I didn’t even leer – but it’s just possible that I thought of Abbie Hoffman and Captain America.

Abbie, most of you may not know (because his moment happened before most of you were born) led protests of the Viet Nam war. (He was smart, charismatic and energetic and articulate and, come to think of it, a friend of ComicMix’s own Mike Gold.) In 1968, in Washington, Abbie was arrested for wearing a shirt that looked like a flag. This is not as draconian as it might seem (though it’s still plenty draconian): in those days, most states had anti-flag desecration laws. So, technically, Abbie was breaking the law.

His conviction was appealed, and overturned. Sometimes the universe is just.

I wonder: would the law have pounced on, say, a lady wearing a stars-and-stripes bathing suit? The flag code, which is promoted by patriotic organizations, specifies “no part of the flag should ever be used as a costume or athletic uniform.” Surely, a swimming suit, however minimal, qualifies as an “athletic uniform.”

And what if our swimmer lies down for a snooze on the beach? Again, the code: “The flag should never touch anything beneath it, such as the ground, the floor, water, or merchandise.” Wouldn’t sand be as insulting as water? (And what kind of “merchandise” are we talking about, anyway?)

If our hypothetical bathing beauty is in trouble, Captain America had really better watch his p’s and q’s. Remember: “No part of the flag should ever be used as a costume…” And doesn’t Cap roll around in the dirt dodging bullets and the like?

I guess, at the end of the day, it all depends on who’s wearing the symbol, and why, and on who presumes to sit in judgment. That’s what the flag is, a symbol. Or a rectangle of colored cloth. But I won’t be entirely facetious if I salute it, later today, though what I’ll be saluting is probably different from what a tea partier salutes, or what is honored by the old men who send young men to war.