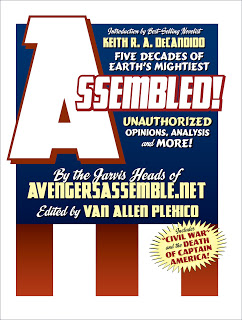 ASSEMBLED! breaks down the history of the Avengers comics by “era,” with chapters focusing on the greatest and most memorable stints by the top Avengers creators, from the Stan Lee-Jack Kirby run and the Roy Thomas period, through George Perez’s two eras,  all the way to Brian Michael Bendis, and everything else in between.  Each chapter was authored by a different noted Avengers expert, presenting the good and the bad of that creative team’s run, as well as commentary, humor, and analysis of the characters and events involved.  Additional chapters explore the Ultimates, West Coast Avengers, Thunderbolts and more. The book concludes with a massive chronology of Avengers history and a look at the top Avengers highlights of every single year from 1963 up to publication.  The book’s Introduction was provided by Keith R. A. DeCandido, editor of the Marvel Novels line from Byron Preiss Multimedia.
ASSEMBLED 2 presents an in-depth look at the “Big Three” Avengers:  Iron Man, Thor, and Captain America, individually and as the leading forces behind the team itself.  The Introduction to this volume is by none other than Marvel Comics Vice-President and longtime Avengers editor Tom Brevoort.  The volume also includes multiple chapters exploring the histories of the greatest Avengers villains, Ultron and Kang (not to mention Thanos), as well as a look at Young Avengers and the epic Avengers Forever.  The book concludes with an in-depth chronicling of all the Avengers appearances in prose novels through the years.
The two books were created and edited by Van Allen Plexico (Sentinels, Lucian), who originated the very first and longest-running Avengers fan web site,AvengersAssemble.net, way back in 1995.  Contributors—collectively known as the “Jarvis Heads”—include such comics-culture luminaries as Sean McQuaid (MarvelHandbooks), David Medinnus (Star-Spangled Site), Joe Crowe (RevolutionSF), Ian Watson, Karen Walker (Back Issue), Mark Bousquet, Sharon Karibian, Rob Clough, Scott Harris, and many more. 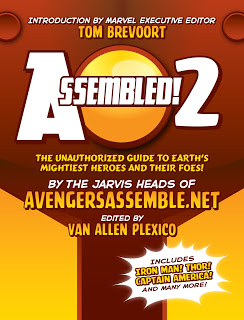 Proceeds from the sale of the books go to the HERO Initiative charity for retired comics professionals, as chosen by legendary artist George Perez.

“These two books have become absolute favorites of so many Avengers fans,” notes Plexico, “and we Jarvis Heads are very proud to have brought them to the public. With the astonishing success of the Avengers movie, and with these new electronic editions, we hope to reach a whole new generation of fans and turn them on to the rich and epic history of our favorite group of assemblers!”
White Rocket Books is a leader in both New Pulp adventure and nonfiction pop culture commentary books.   White Rocket books have hit the Amazon.com Top 15-by-Genre and have garnered praise from everyone from Marvel Comics Vice President Tom Brevoort to Kirkus Reviews.
ASSEMBLED! and ASSEMBLED 2 are $2.99 each in the Kindle store at Amazon.com.  They are also available as trade paperbacks.
ASSEMBLED!  Five Decades of Earth’s Mightiest
248 pages in print edition
ASIN: B00820UESS
ASSEMBLED 2: Earth’s Mightiest Heroes and Villains
186 pages in print edition
ASIN: B0082PXQH4
On Amazon.com:
ASSEMBLED!
Kindle:  http://www.amazon.com/ASSEMBLED-Decades-Earths-Mightiest-ebook/dp/B00820UESS
Paperback:  http://www.amazon.com/Assembled-Mightiest-Unauthorized-Opinions-Analysis/dp/0615154441
ASSEMBLED 2
Kindle:  http://www.amazon.com/ASSEMBLED-Earths-Mightiest-Villains-ebook/dp/B0082PXQH4
Paperback:  http://www.amazon.com/Assembled-Earths-Mightiest-Heroes-Villains/dp/0984139206