George Newbern reprises role of Man of Steel for SUPERMAN VS. THE ELITE 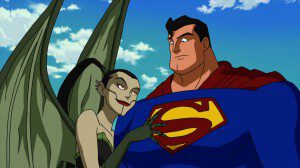 George Newbern makes his triumphant return as the voice of the Man of Steel in SUPERMAN VS. THE ELITE, the latest DC Comics Premiere Movie coming June 12 from Warner Home Video.

Newbern put all the resounding tones of truth, justice and the American way into the commanding vocals behind the animation of Superman in both the Justice League and Justice League Unlimited television series. He last reprised the character’s voice for the DC Showcase original animated short, Superman/Shazam! The Return of Black Adam.

Newbern is a constant on primetime television, appearing on current hit series like NCIS, The Mentalist, Castle and Grey’s Anatomy, to name a but a few. He’s widely recognized for his starring turn opposite Steve Martin in Father of the Bride, and for the NBC series Providence. His latest projects include a recurring role on the new ABC hit series Scandal. 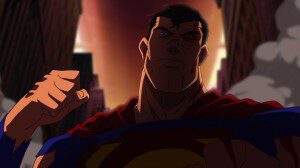 In SUPERMAN VS. THE ELITE, Superman’s effectiveness as a super hero comes into question when a new group of super powerful crusaders, known as “The Elite,” appear on the scene.  As super heroes, the Elite know no bounds, and are more than willing to kill, even on a massive scale, to stop villainy — putting them on a collision course with the ever-ethical and decidedly non-lethal Man of Steel.

Newbern offered a few thoughts about playing Superman in a short chat following his final recording session for the film. 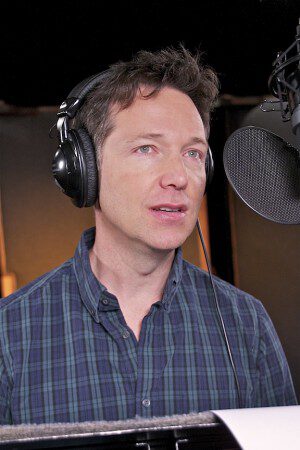 QUESTION: Where do you start as an actor when trying to create a voice for Superman?

GEORGE NEWBERN: I think you watch an actor like Jimmy Stewart in Mr. Smith Goes to Washington or It’s a Wonderful Life, and you try to find the humanity of an everyman like that. When I think of an All-American hero, I think of an actor in a role like that. And that’s what Superman really is – an American hero. Super powers are just ancillary. It’s that character, with all those principles and understanding, that’s who he is right there.

QUESTION: Are there any specific characteristics you believe are essential to the voice?

NEWBERN: I think I tried to portray a sense of trust and power and charisma for Superman. I think that’s what we believe Superman is.

QUESTION: You had a guest role on Private Practice opposite Tim Daly, the actor you replaced as Superman for the Justice League animated series. Did the commonality come up for discussion while you were on set?

NEWBERN: We laughed about it. I said something like “Thanks for being busy,” and he asked if I was having fun with it. We didn’t really compare notes  … there was no secret handshake or anything. But there was an acknowledgment that we’re in an exclusive club. 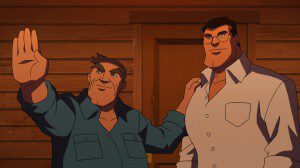 QUESTION: Aside from Superman, do you have a favorite DC Comics character?

NEWBERN: I like Flash a lot. He cracks me up. And always has something to say. Plus Michael (Rosenbaum) is hysterical. But all of those actors on Justice League were terrific – a really great group of people. We had fun with the core cast in the old days. Susan (Eisenberg) and Michael and Carl (Lumbly) and the gang. Then we had these rotating guest casts as the seasons went on, and it was insane to see who would come through the door of the booth.  It was guys like John Rhys-Davies, Ed Asner, Powers Boothe, Mark Hamill. There were so many great actors. It was funny because I’d go to work on a TV series and I’d look at one of the series regulars and immediately realize, “Oh, he did a role on Justice League!” So it was fun. It was a lot like doing a little reader’s play every week. 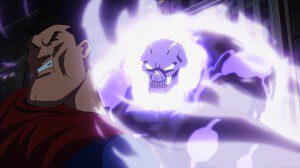 QUESTION: What value do you see for comic books in society today?

NEWBERN: I see value in comic books, especially in terms of graphic art. It’s sort of old school and I think it gives people something tangible. Kids are reading things like e-books, and people are starting to forget that reading can be held in your hand and seen and appreciated.

So there’s a tactile benefit to it. And the old style is a great way to tell a story. Things don’t have to be 3D or complicated. That’s where a comic book comes in – it’s a simple, 2D way to tell a story with great art and words. There’s a lot of value in that.

QUESTION: What are your children’s impressions of you voicing Superman?