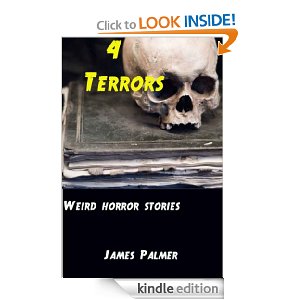 The House of the Witch-Gideon Cain is a Puritan charged with tracking down the demon Azazel, who was responsible for setting off the Salem witch paranoia. But when another town is believed to be infested by witchcraft, will he be able to tell friend from foe in time to save it?

The Tunnels of Lao Fang-A daring young man goes to Hong Kong to rescue his friend and uncovers an evil older than time.

The Hand of Yogul-Can a former criminal and slave stop his former master from unleashing a terrible evil on the world?

The Meteor Terror-A meteor strikes a small Georgia farm and brings with it a terrible evil from beyond space.

Ripped straight from the classic pulps, and inspired by such visionaries as Robert E. Howard and H.P. Lovecraft, these four, previously published tales of weird menace and cosmic horror will leave you gasping for breath and asking for more!

If any of you guys missed these stories the first time around, now’s your chance! And it’s a steal at 99 cents.
You can check it out here: http://www.amazon.com/dp/B0085MQV08/ref=rdr_kindle_ext_tmb
Share