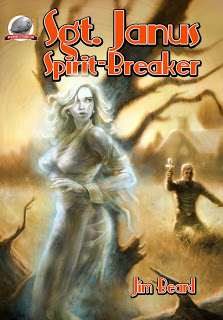 Airship 27 Productions is thrilled to announce the debut of the newest occult investigator in the grand tradition as such notable pulp heroes as William Hodgson Hope’s Carnacki, Seabury Quinn’s Jules de Grandin, Manly Wade Wellman’s John Thunstone and the popular Ravenwood, Stepson of Mystery.
Situated in the rural back country of Edwardian England is an old, mysterious house whose unique owner earns his living as a Spirit-Breaker, a hunter of ghosts.  A former military veteran, Sgt.Roman Janus has devoted his life to aid those haunted, both emotionally and physically by obsessive wraiths whose spirits are still anchored to our world.
Sgt.Janus – Spirit Breaker is the creation of new pulp writer Jim Beard.  Part detective, part occultist, Janus is himself a man of mystery whose own past is shrouded and the motivations behind his calling kept hidden.  Within this volume you will find eight tales as narrated by his clients, each with his or her own perspective on this uncanny hero and his amazing career. Filled with suspense, terror and agonizing pathos, each a solid mesmerizing journey into the unknown world beyond.
Featuring a cover by artist Jeff Herndon and eight stunning illustrations by Eric Johns, with design work by Pulp Factory Award winning Art Director, Rob Davis and edited by Managing Editor Ron Fortier, Sgt.Janus – Spirit Breaker is the first in a new series by one of today’s leading stars in New Pulp Fiction.
“…Beard’s fiction is anything but pat and routine. While he may deliberately conjure the spirits of authors of Victorian and Edwardian occult fiction before him, Beard’s prose is fresh and entirely modern in his, at times, frank and unsettling tales of the wages of his characters’ past sins. Each story breezes by and like the best tales told round the campfire, it leaves the reader hungry for more.”   William Patrick Maynard (The Terror of Fu Manchu & The Destiny of Fu Manchu.)
Airship 27 Productions – Pulp Fiction For A New Generation!
Available from :
Airship 27 Digital Hangar as a $3 PDF (http://robmdavis.com/Airship27Hangar/airship27hangar.html)
Amazon for $16.99  (https://www.createspace.com/3881169)
And soon for $14.99 from (http://indyplanet.com/store/)
Share