FORTIER TAKES ON FERGUSON AND ‘FOUR BULLETS FOR DILLON’! 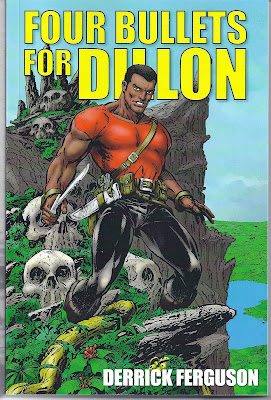 Over the past few years several new pulp writers have created terrific heroes that easily compare with the classic characters of the 30s magazines. One of these is Dillon by the talented Derrick Ferguson.  Dillon is an African American modern day adventurer who travels the globe aiding people in desperate need of rescue and at the same time taking on insidious villains of every imaginable form.  The thing I absolutely love about Dillon is that even in the midst of the most dire situations, when death practically is assured its ultimate victory, he manages to retain his sense of humor making him the coolest pulp hero of them all.
After offering up a couple of fast paced novels which first introduced us to Dillon and his exploits, Ferguson this time collects four short tales that were published in various projects over the years and this fan is most grateful for this.  These four action packed thrillers display the range of settings and atypical missions our hero takes on, each is a fast, mile-a-second read that will leave blisters on your fingers.
“Dillon and the Bad Ass Belt Buckle,” finds our hero and his mentor, Eli Creed, in the jungles of Cambodia to rescue an American film actress.  Their mission is successful up to the point they lose their transportation and have to seek refuge in a fortified camp called Cheap Prayer. It is by a mercenary outlaw named Kudro Mayoka. I won’t spoil the fun with any more details except to add the plot revolves around Dillon challenging Kudro to a survival race with the winner becoming the enclave’s new leader and claiming a giant belt buckle studded with jewels and emblazoned with the words BAD ASS.  Honestly, I don’t think I stopped laughing once while reading this one.
“Dead Beat in La Esca,” is a real collector’s treasure as it was co-written by Joel Jenkins and has one of Joel’s pulp characters, guitar player Sly Ganlet meeting up with Dillon one night in a fancy nightclub.  Unbeknown to the both, they’ve been set up by a mysterious organization that wants them both out of the way.  The irony is both men may actually do the bad guys a favor by killing each other first.  A different kind of story and though worthwhile, was the weakest in this collection.  Guess I just like my Dillon flying solo.
“Dillon and the Escape From Tosegio,” is another one of those oddities.  It’s a rollicking, non-stop thrill ride which was penned as a prequel to the first Dillon novel.  It reminds one of those opening action prequels in the James Bond movie, done to set the stage and get the audience in the proper mood.  Having read “Dillon and the Voice of Odin,” when I came to the end of this short, I could easily envision the opening credits of the bigger movie.  Really happy to see this one in print for all Dillon fans.
Finally, Ferguson saves the best for last in “Dillon and the Judas Cup.”  Although I likened Dillon to action heroes like Bond, there’s also a great deal of Indiana Jones in his adventures and they revolve around arcane lore long forgotten in time.  Such is the plot of this yarn wherein a chalice made from the thirty pieces of silver paid Judas Iscariot for betraying Jesus, has survived through the ages bringing both power and tragedy to any who possess it.  Dillon is hired by a dying rich industrialist to procure the cup and once and for all hide away so that it can never again curse mankind.  To do so he must recruit two of his associates, a cat-burglar and a computer hacker.  Along with the industrialist beautiful daughter, they fly to the remote island where it is being held and launch their Mission Impossible-like plan to steal it.  Of course, like any other Dillon caper, things never go as smoothly as envisioned and soon all of them are racing for their lives to flee the atoll before its volcano erupts and sinks them all.  It’s a grand finale to a wonderful anthology.
If you’ve yet to meet Dillon, this the book is your invitation to a world of thrills and spills as delivered by a writer at the top of his game.  Ferguson’s love of action adventure explodes from every page and he always leaves his readers both satisfied and begging for more.  “Four Bullets For Dillon,” is a hands down winner and I’d be remiss not to mention it comes wrapped by a gorgeous cover by artist Anthony Castrillo.  What more could any pulp fan want?