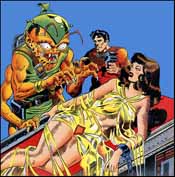 My weekly rants here do not seem to be attracting the same numbers as my colleagues. This hurts my feelings. I suppose I could pick a fight with Michael Davis, but I’m not very good at feuds. I could start some kind of poll of web comics, but you don’t read columns to find out what you already think. You read columns to get a specific perspective on something. Just, apparently, not my opinion on the stuff in pop culture that has attracted my attention lately.

So let’s talk about sex.

Perhaps I don’t read as widely as I should, but very few stories about aliens and sex show much imagination. Most of the time, only two beings are involved. Sex organs and other pleasure centers seem to be located at the same places they are in humans. The exchange of bodily fluids is necessary for reproduction, unless the species is advanced enough to use science instead.

Biology, it seems, is destiny.

As I wrote here, there seems to be a need to put breasts on any females, whether they are mammals or not.

Even worse, rotting female zombies are often nothing more than flesh, bone, and gigantic mammary glands. If you don’t believe me, look at any random issue of DC’s Blackest Night. I suppose that it’s possible that every woman in the DC Universe had silicone breast implants which wouldn’t decompose at the same rate as their human parts, but if that were true, wouldn’t there have been a story somewhere in The Daily Planet? Wouldn’t Dr. Midnider have mentioned it?

Comics are graphic stories. That means they have art. It wouldn’t be too difficult to create characters who aren’t human, who require three or more individuals to reproduce, and whose reproductive organs are in places other than their crotches. Maybe they have to sit in a circle and hold hands, so the story could include graphic sex scenes that are G-rated.

Or there could be a society where sex is an involuntary (and not entirely pleasurable) physical reaction, like sneezing. Kleenex would be as provocative (and necessary) as condoms, and sold behind the check-out at drugstores.

Or maybe they could sneeze out of their gigantic breasts, which would sell a zillion copies of that particular comic. And also, drive up my screen views.

(Editor’s Note: Kleenex is a registered trademark of Kimberly-Clark.)

SATURDAY: Marc Alan Fishman and Why Most DC Movies Suck