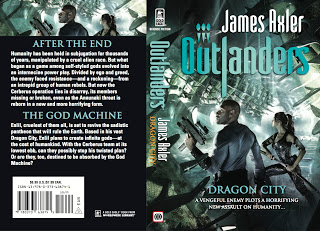 The latest volume of James Axler’s OUTLANDERS series, DRAGON CITY, is available from May.

With one of their team missing, another wounded and their base in ruins, the heroic Outlanders are at their lowest ebb when they are sent to explore the mysterious Dragon City that has sprung up on the banks of the Euphrates River.  Within its walls, they discover the template to a pantheon of reborn gods of evil — gearing up for the approaching God War.
This volume of the modern-day pulp sci-fi series is written by Rik Hoskin and can be read as a stand-alone as well as developing themes that have been building over the past few books.
About the author:  Writing as “James Axler”, Rik Hoskin has been the primary author of the Outlanders series since 2008 as well as contributing several volumes to James Axler’s Deathlands.  His fourth Outlanders book, Infinity Breach, paid homage to the 1930s pulp heroes while blurring the barrier between fiction and reality.  Beyond his Outlanders books, Hoskin is a comic book author who’s written Superman for DC Comics and helped develop a successful Spider-Man series for Marvel Comics’ European licensor, Panini, among others.  He currently writes for Star Wars: The Clone Wars Comic as well as several younger readers titles.
http://www.fantasticfiction.co.uk/h/rik-hoskin/
Share