Mission: Impossible is one of those malleable concepts that can tackle any content and is only as good as the concept, cast, and director. As a result, the film version of the classic 1960s television series has had its hits and misses, but seems to be getting stronger with each film. J.J. Abrams reinvigorated the franchise with the third installment and then handed it off to Brad Bird, making his live action debut with Ghost Protocol.

It’s been far too long since Ethan Hunt and IMF team were handed a mission after that strong outing so it’s thrilling to see Mission: Impossible – Ghost Protocol be such a rousing success. The movie is out this week on Blu-ray and DVD and is a Must Have because there’s so much to like about it. Bird, best known for the underrated Iron Giant and The Incredibles, takes everything from those animated adventures and brings them to the real world. Bird brings his sense of pacing and timing to the mission along with a much needed dose of humor, leavening the drama.

Hunt (Tom Cruise) is in a Russian prison for unknown reasons but an IMF team breaks him out and only then does he get told of a nuclear prophet determined to set off an atomic war to bring about change. His mission: find the man and stop him. Of course, nothing goes easy, especially when it appears the IMF is accused of bombing the Kremlin, a clever feint on the part of the real villain: Kurt Hendricks (Michael Nyqvist). As a result, the Secretary is in Russia to tell Hunt the president has executed the Ghost Protocol, effectively dissolving the IMF but handing Hunt and his team one final clandestine mission to save the world.

The team? The only regular from previous films is Benji Dunn (Simon Pegg), now promoted to field agent. He’s accompanied by Carter (Paula Patton), who lost her fellow agent and lover (Josh Holloway) to an assassin who is now connected to the new mission so she sees it as a chance for revenge. The fourth member is new to the IMF; Brant, a consultant to the secretary (Jeremy Renner) who it is learned was a former field operative who believes he was responsible for the death of Hunt’s wife, Julia Mead, (Michelle Monaghan). 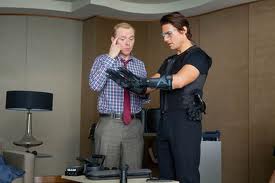 The screenplay from André Nemec and Josh Appelbaum takes us throughout Eastern Europe and the Middle East at a breakneck pace, but always pausing long enough to dole out character revelations and a chance for the characters to actually talk to one another, a rarity in these kind of action films. Bird clearly can handle the adventurous aspects and dramatic bits with an even hand. The cast works well together and the leads are well supported by a fresh cadre of international performers, including Anil Kapoor, Léa Seydoux, keeping the film looking and feeling fresh.  There are two nice cameos towards the end which tie all four films together and for those who haven’t seen it, I don’t want to spoil it for you.

Visually, the film is breathtaking, as we see the splendor of Mumbai and elsewhere but of course the set piece, Hunt’s magnetic climb up the world’s tallest tower, is stunning. Bird and the scriptwriters have hit upon a series of obstacles that feel like M:I but updated for today, which is a strength.

If anything doesn’t work, it’s the more tried and true elements such as an overlong chase through a bazaar (even with a sandstorm) and a climactic battle inside a car park. Everyone struggles to beat the countdown clock but it all drags out just a bit and the film could have been tighter with a few judicious edits, but they’re minor quibbles. Helping overcome that is Michael Giacchino’ s wonderful score which honors the original series and gives it a flavor all its own.

“Mission Accepted” (47:35) is found on both versions of the Blu-ray release while “Impossible Missions” (51:37) contains most of the Best Buy bonus material. In both you get 15 minutes of deleted scenes which makes for interesting watching and it’s recommended to use the Bird commentary. The regular Blu-ray offers up “Heating Up in Dubai” (17:36), a pretty travelogue; “Vancouver Fisticuffs” (12:01), a look at the climax, which happened to be shot in Canada; “The Sandstorm “ (3:06), which took two weeks to shot in Canada and Dubai; and “Props” (3:07).