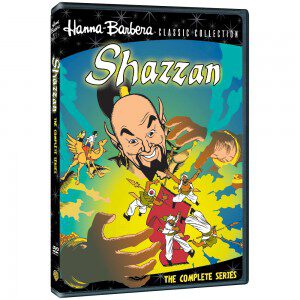 Growing up in the 1960s, I first heard “Shazam” from the lips of Gomer Pyle, USMC and only later learned it had something to do with a defunct character, Captain Marvel. When I then saw ads in the comics for a Saturday morning series called Shazzan, I was confused, thinking it was somehow connected. Nope, the CBS series created by the great Alex Toth and produced by Hanna-Barbera and had the following narration:

“Inside a cave off the coast of Maine, Chuck (Jerry Dexter) and Nancy (Janet Waldo) find a mysterious chest containing the halves of a strange ring. When joined, the ring forms the word “Shazzan!” and with this magical command, they are transported back to the fabled land of the Arabian Nights. Here they meet their Genie, Shazzan (Barney Phillips). Shazzan presents them with Kaboobie (Don Messick), a magical flying camel. Shazzan will serve them whenever they call, but he cannot return them home until they deliver the ring to its rightful owner. And thus begins their incredible journey.”

Adding an extra “ho” to the Jolly Green Giant’s “ho ho ho”, the 60-foot tall Shazzan was a jovial genie, calling the kids “little masters” and never tired at saving them with regularity. The series ran from September 9, 1967 and ended on Saturday, September 6, 1969 and featured two escapades per thirty minutes and achieved just enough popularity to be repeated as part of countless series in the 1970s and 1980s before finding a home on cable. The complete 36 episode series has been collected for the first time thanks to the tireless folk at Warner Archive.

[youtube]http://www.youtube.com/watch?v=lYMeVDMi_tk[/youtube]
Despite wanting to find the ring’s owner and origins, the kids never achieved that goal, but had plenty of experiences that more than made up for their failure. Shazzan also seems to long for his original master but appears perfectly content to hang with the kids. The bad guys – including Zahran, Magi, King of the Forest of Fear, Mysterio the Mini-Magi, The Evil Regent, The Evil Demon, The Evil Hunter, Makdar the Mirage Maker — f wind up trying to destroy the magical being and find themselves or their weapons turned into harmless objects, resolving the fight in a fairly non-violent manner, a plus for worried parents.

Chuck is an amateur magician while his twin sister appears not to have any hobbies. The genie aids Chuck by providing him with the cloak of invisibility, vanishing dust, magic rope, and opal of knowledge.

The stories with their magical flare and Arabian flavor help make this distinct from the fare it aired with and against during the 1960s. The writing is typical of the era as is the H-B animation but Toth clearly had fun with the designs, which are superior to the stories themselves. Its fun to watch some of these but this is a collection for a very specific audience. The two-disc set’s sole extra is The Power of Shazzan – lifted from Saturday Morning Cartoons 1970s Vol. 2 —as a number of folk look back at the show, marveling at Toth’s strong design and ridiculing the state of writing in the 1970s.