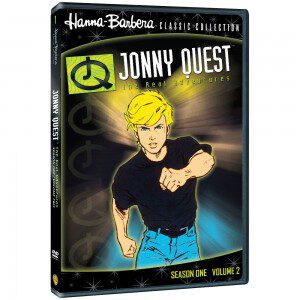 To me, Jonny Quest was one of the best animated series a kid could grow up on in the 1960s. The prime time show had nice designs, great storytelling and you could imagine yourself getting mixed up into adventures with Race Bannon and Hadji. It was relatable and fun and exceedingly well done.

By the 1990s, though, Indiana Jones and his brethren raised the stakes for action/adventure in live action as well as animation. The Cartoon Network recognized this and commissioned an updated version known as The Real Adventures of Jonny Quest which aired from August 26, 1996 to April 16, 1997. To make the concept contemporary, they added Jessie Bannon as the duo became a trio while Dr. Benton Quest and Race Bannon went looking into the unexplained. Given the fondness for CGI at the time, some of the stories also meant visits to the three-dimensional QuestWorld (hoping to tap into the audience’s fascination with virtual reality)

The show never quite worked and still doesn’t hold up to repeated views, but for diehard fans, Warner Archive has released the first season in two volumes of thirteen episodes each, the latter set recently released. The show certainly suffered when showrunner Peter Lawrence was fired in 1996 and John Eng and Cosmo Anzilotti arrived to take over. You can tell where Lawrence left off after the first season’s initial 13 episodes (volume one) as his real world –based storylines were replaced with more traditional SF/supernatural stories. The goal, turning the beloved character, into a global icon and franchise fizzled given poor execution and despite a massive marketing campaign.

It certainly looks like the classic Jonny Quest, thanks to art director Takashi Masunaga’s efforts. Lawrence used Jessie, who was created in 1986 on The New Adventures of Jonny Quest, a previous reboot attempt that also failed. The two were to bicker and spark off one another, providing some dramatic conflict absent from the original version. Visually, the CGI and the digital painting certainly gave it an interesting look. By aging the leads only a few years, Jonny (voiced by J. D. Roth) and Hadji (Michael Benyaer) could now be teenagers accompanied by the seemingly immortal Bandit.

Lawrence, hoping to make this an X-Files for kids, researched real phenomenon such as the “Airstrips of Nazca, the Ruins of Teotihuacan or the possible existence of Giant Squid” for story fodder. Lawrence once wrote, “Jonny’s response to danger will be close to Race’s. Jessie’s intrigue with mysterious, unexplained phenomena will be close to Dr. Quest’s. And Hadji, with his roots in a different culture and a more spiritual approach to life, is different again.” Still, there had to be bad guys and the recurring threats from Jeremiah Surd and Ezekiel Rage slowed things down, although Surd’s desire to exact revenge against Bannon was at least interesting.

The second volume opens with an investigation of the legendary Mary Celeste and then sends the team to Borneo. Surd appears in several of the early episodes and you can begin to feel the tone of the series shifting away from Lawrence. The stories remain grounded until “The Ballad of Belle Bonnet” featuring a ghost and then we get a werewolf tale and suddenly we’ve moved into tried and true formula television. Rage wants to melt the polar ice caps without concern for humanity pushing credulity to its limits. The first volume is clearly the stronger written and more interesting collection of episodes, but there are enough nuggets here to keep you watching.