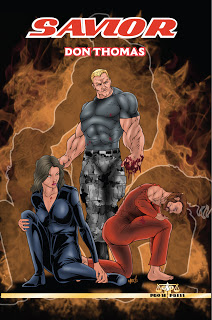 “Science Fiction,” Tommy Hancock, Partner in and Editor in Chief of Pro Se Productions stated, “is definitely a cornerstone of Pulp Fiction, both Classic and New.  It’s an area, though, that Pro Se really hasn’t gotten into until recently with some entries in our magazines.  ‘Savior’ by Don Thomas is our first novel jumping nose first into that genre and we’re really proud of that.  And it’s a vein of Science Fiction that’s somewhat popular lately, apocalyptic virus takes on the world and a small portion of the population rises to combat it.  But it’s also different, too, in that Don exposes what happens when that small section of humanity becomes heroes of almost cosmic proportions in the eyes of the world and at what costs this takes place.”


From the back cover copy for SAVIOR by Don Thomas-


In the Near Future, a Red Death will cover the world. As civilization struggles to survive, one government emerges with a sliver of hope- The Strategic Agency against Viral Infections by Organized Resistance. SAVIOR.

SAVIOR delivered on the promise of a miracle cure, elevating themselves into legends…but behind every legend lies truths and secrets…truths and secrets former SAVIOR agent Steve Ryker has sworn to bring into the light…even if it kills him.

SAVIOR-Edited by Nancy Hansen, Cover Art by Marc Guerrero and Design by Sean E. Ali! Ebook Formatting by Russ Anderson!  Available now on Amazon and at www.prosepulp.com and in ebook form at Smashwords, Amazon, and Barnes and Noble!


SAVIOR!  From Pro Se Productions- Puttin’ The Monthly Back In Pulp!