HANCOCK TIPS HIS HAT TO DEMON’S NIGHT AND JASON DARK! 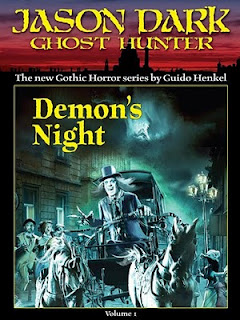 Ever since a particular detective first made his literary presence known in The Strand Magazine (and actually in other ways even before that), there’s been a bevy of creators find themselves drawn to tell imaginative tales replete with shadowy twists and tangled turns in the fog ridden streets of England in the late 19th Century.  Many of those have dared to mimic Doyle, others have worked to flat out ignore him, and still others have gone steps beyond where his most notable creation ever went.   It’s a rarity, to me anyway, when someone writes in that vein and simultaneously completely respects what came before while completely and totally having absolute fun with what they are doing.

Guido Henkel, the architect of the now 11 volume JASON DARK series, skillfully manipulates everything readers love about Victorian England and the supernatural while obviously having the best magical, mystical, monstrous time a writer can have in DEMON’S NIGHT, the novella featuring the debut of the Victorian Detective that handles the cases his better known peer won’t often even entertain.

People are dying in Whitechapel.  Not an unusual thing, except the bodies being discovered are withered, drained of every fluid possible, dried like prunes.   Tweaking the interest of Dark, the murders are the doing of a demon, a slave serving a master seeking release.  And only Dark and a young Oriental woman with skills all her own stand in the way of this netherworldly plot.

DEMON’S NIGHT is a wonderful story and great introduction to Jason Dark.  Obviously owing a bit of who he is to those who came before him, Dark is also a figure all his own.  At times moody, often introspective, and dangerously spontaneous when it’s least advised, Dark applies logic while opening his mind to the weirdness the world truly has to offer.   The supporting cast appearing around Dark for the first time is definitely an added asset to the story and the character.  Siu Lin, initially a victim of the beast of the tale, quickly proves her worth to Dark and makes a great compliment to his rather complex lead.

Henkel keeps the story rolling, darting back and forth between Dark’s and the demon’s perspective, and makes sure the reader stays along for the action packed storm that unfolds from beginning to end.

FIVE OUT FIVE TIPS OF THE HAT- DEMON’S NIGHT is not only a great start, it’s a truly awesome tautly told, well crafted novella featuring the best of Holmesian influence and Henkelian talent.