Your First Look at the new Lone Ranger and Tonto 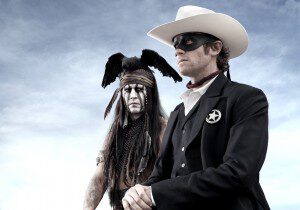 The production of Walt Disney’s take on The Lone Ranger began about a week ago and now we have our first glimpse of the famous masked man and his Native American sidekick. In case you forgot, the Ranger is played by Armie Hammer (J. Edgar) and the guy under the war paint is Johnny Depp, whose casting as Tonto two years backs helped make this movie a reality.

This is a clear departure from the more traditional blue fabric outfit the Ranger has been depicted in since the radio series began in the 1930s. The Ranger’s outfit has gone largely unchanged in comics, serials, television and tons of merchandise so this will help set it apart from what has come before.

Despite production nearly being derailed because of the inflated budget, it was retooled and finally green lit some months back. The official synopsis reads: Native American spirit warrior Tonto (Johnny Depp) recounts the untold tales that transformed John Reid (Armie Hammer), a man of the law, into a legend of justice-taking the audience on a runaway train of epic surprises and humorous friction as the two unlikely heroes must learn to work together and fight against greed and corruption.

The movie is being directed by Gore Verbinski and produced by Jerry Bruckheimer, the team that worked magic with Depp in the Pirates of the Caribbean franchise. Meantime, Depp will next be seen as Barnabas Collins in Tim Burton’s Dark Shadows, coming in May. He has been attached to numerous projects, playing one pop culture icon after another and most recently has been attached to a big screen adaptation of Kolchak the Night Stalker, based on Jeff rice’s novel and the ABC series featuring Darren McGavin.