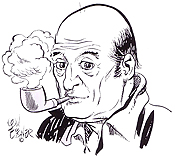 Well, I didn’t see you at the Will Eisner panel/celebration, held last Thursday, March 1st, at the Museum of Comic and Cartoon Art, which, if you need to ask, is located at 594 Broadway, New York City, in the district known as SoHo. (And if you did need to ask…let’s just say that any comics reader, casual or otherwise, who is in lower Manhattan and has not yet visited MOCCA, and continues not to visit MOCCA just may have condemned themselves to an eternity of having Seduction of the Innocent read aloud to them by Bobcat Goldthwait.)

But back to the panel/celebration: you weren’t there and we didn’t miss you because we had what was pretty nearly a full house and that was gratifying. The “we” to whom I refer was three people who knew, or knew a lot about, Will, who died in 2005; Judy Hansen, Karen Green and your humble servant. Moderator was the always reliable and excellent Paul Levitz, so pertinent questions were asked, both of the panelists and the audience (of which you were not a member). I left knowing more than when I came, and I suspect that most of the other folk there did, too. I was particularly interested in Ms. Green’s discussion of Will’s business practices, which helped confirm my belief that Will Eisner was what Mark Twain wanted to be: a successful capitalist as well as a superb storyteller.

Did I mention gratifying? For openers, it’s always nice when someone of genuine merit gets recognized, especially when that person was a friend. And the fact that the venue for such recognition exists is nice, too. It indicates that the (always) artificial demarcations between “high” and “low” culture are going the way of the dinosaurs, and some would say, amen and about time.

(But not you because you probably wouldn’t be where amen and about time was being said.)

It might be possible, humbly, hat clutched in whitened fingers, to suggest that respectability does not always benefit what becomes respectable, but that is a pretty damn complicated topic for another occasion.

As we comics geeks continue our gradual trek toward the nicer parts of town, and the world outside our borders comes to recognize that the great comics guys – Eisner, Jack Kirby, Walt Kelly, and, no doubt, young others who are too busy at their boards to wonder about plaudits…these guys were as accomplished in their ways as Dickens and Michaelangelo were in theirs, we’ll have further opportunities to pay them the homage they deserve Is a televised awards ceremony too much to expect? Oh lordy, I hope so. (As I told you last wee, televised awards shindigs are, I boldly state, post-industrial versions of the Inquisition.)

Not that any of this concerns you. Awards? Panels? Not for you. You’re too busy watching Cops reruns. Bad boy bad boy.