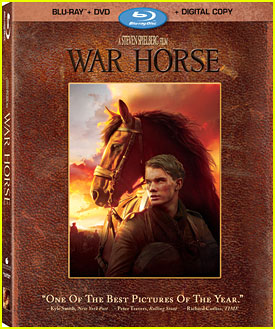 BURBANK, Calif., February 21, 2012 – Legendary Academy Award®-winning motion picture director/producer Steven Spielberg presents the critically acclaimed and multi Academy Award®-nominated epic adventure “War Horse” on Blu-ray™, DVD, Digital and On-Demand, April 3. This newest home entertainment release not only enthralls viewers once again with its visually stunning and emotionally heartwarming story on the Blu-ray, but also offers an unprecedented look into the making of the film by Spielberg himself.

The extraordinary journey of courage and friendship as seen through the eyes of one unforgettable horse named Joey and his miraculous journey to find his way back home, “War Horse” is a must own contemporary classic for everyone’s home entertainment collection. Spielberg’s renowned creative passion and artistry not only shine throughout the film but are also evident in all the fascinating bonus features included exclusively on the Blu-ray disc.

The premium 4-Disc Blu-ray Combo Pack in particular allows viewers to explore the filmmaking process and storytelling adventure though a special 60 minute documentary (named “A Filmmaking Journey”), created by Spielberg, that offers a never-before-seen inside look into the making of “War Horse.” Additional bonus features include a behind the scenes look at Spielberg’s Award-Winning “Dream Team” – the film’s scoring session with five-time Oscar-winning composer John Williams, the editing room with three-time Academy Award winning film editor Michael Kahn, the sound room with seven time Oscar-winning sound designer Gary Rydstrom, and a look through Producer Kathleen Kennedy’s lens as she shares photos she took during the filming and recounts her discovery of “War Horse.”